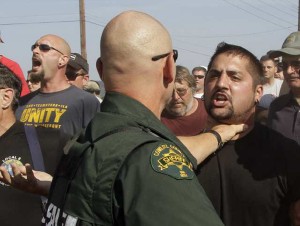 Is it too soon to call it the “Hoffa Effect”?

Sometime before dawn this morning, 500 longshoremen broke down gates at a Longview, Washington shipping yard and proceeded to damage cars, cut brake lines, dump grain, and overpower security guards. No one was hurt, and nobody was arrested. The early morning disruptions were presaged by protests yesterday, during which longshoremen stood on railroad tracks in order to prevent the first shipment of grains from being delivered to the new, $200 million terminal. Met by police, 19 were arrested on charges of trespassing, including ILWU union President Bob McElrath.

The protests were motivated by a breakdown in negotiations between the union workers (ILWU) and the non-union plant they worked for (EGT). Union workers say that their jobs were being outsourced to a Japanese firm, even after EGT had received tax breaks and promised to create well-paying jobs at the new terminal. After a year and a half of negations, EGT walked away from the table, contracts unresolved.

Union leaders say they hadn’t called for such aggressive actions, and according to the AP, the blockade defied a federal restraining order put in place last week after a series of assaults and death threats. EGT chief executive Larry Clarke called the protests “criminal” and promised to “support prosecution of this criminal behavior to the fullest extent under the law.”

Escalating in the week following James Hoffa’s now infamous Labor Day speech, some are wondering if the violent tactics employed (windows smashed, guards held hostage) weren’t inspired by the Teamster’s call to metaphoric war. Michelle Malkin, for one, suggested in her coverage that “all that Labor Day incitement is paying off.” Hot Air took the episode as proof that when “unions accuse conservatives of being SOBs that need to be fought, just remember that they mean that quite literally.” And Fox Nation asks most plainly in their headline: “The Hoffa Effect?”

Were the longshoremen heeding Hoffa’s call when they dumped a train’s worth of grain? While this does sound more violent than your average picket line, it doesn’t seem likely that these longshoremen’s protests have anything to do with Hoffa. The frustrations that led up to today’s event were job and benefit related, the ultimate agitation being the threat of lost jobs. Things did indeed turn violent, perhaps lending weight to cries of union thuggery. But the protests have thus far been focused, and without any indication of intent to strike beyond EGT. Tea Partiers probably need not worry this time around.