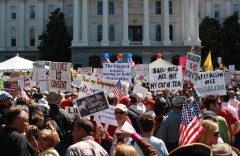 Interesting new poll numbers out today that I imagine will result in a lot more politicians addressing the Tea Party movement with increasing sincerity between now and November. Turns out no matter how in the habit the media is of using ‘Tea Partiers’ as a byword for crazy, fringe, offensive sign-bearing Americans, they are actually the opposite. Namely, everyday Americans.

Conclusion in all this? A few things. One, the Tea Partiers are not a temporary phenomenon. Two, a lot of people may be angry at the government right now, but these numbers suggest that just as many are angry at the Republican party. Says Marc Ambinder:

Yes, the lion’s share of the other half say they’re independent. But they’re not: they’re Republican-oriented conservative voters who are dismayed by the direction of the GOP and who don’t want to identify with the party’s brand.

The problem with that conclusion being that ever since the election the GOP has been struggling to find a brand, or a brand other than being the party of ‘No.’ In fact, in the last seven or eight months it would appear that the GOP has increasingly relied on the Tea Party to provide the GOP Party with direction. Which is more like the tail wagging the dog than a political party ready to lead its followers into the next election. Either way, the Tea Partiers are definitely here to stay.