Lou Dobbs Wonders If Obama ‘Is Going To Be Sucking His Thumb In A Dark Corner?’ 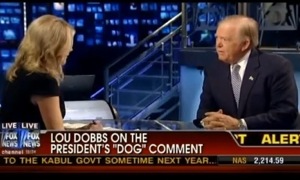 Megyn Kelly had on Lou Dobbs as guest on her show America Live today in which they talked about the emerging narrative of the White House “potentially being thin skinned” as Kelly put it just before running a clip of President Obama‘s now infamous quote in which he claimed “powerful interests” who “talk about me like a dog.” As if to prove the president’s point, Dobbs chose not to soften his rhetoric, instead upping the sophomoric ante by ostensibly calling the sitting U.S. President a cry baby. This is how we live now.

First some background. The segment opened with a discussion between Kelly and Dobbs regarding the President’s plans to not attend 9/11 memorial services in Lower Manhattan, choosing instead to offer a prepared statement about the military at the Pentagon. According to Kelly, the White House has not yet revealed the reasons behind Obama’s decision, which in her mind, “played into a narrative that has emerged about the white house potentially being thin skinned and not wanting to hear certain criticisms or place themselves in certain lights.”

Producers then played a clip of Obama speaking at a rally in Wisconsin yesterday in which he said:

“I wanted to be stronger than it was before. And over the past two years, that’s meant taking on some powerful interests. Some powerful interests that have been setting the agenda in Washington for a long time, and they’re not always happy with me. They talk about me like a dog. That’s not in my prepared remarks, but it’s true.”

After showing White House Press Secretary Robert Gibbs “doubling down” on these comments during today’s briefing saying “On occasion dogs get a better representation.” Kelly asked Dobbs for his thoughts, pointing out that President Bush’s staff also spoke about the harsh criticisms that his administration endured, particularly in the later stages of his second term. But Dobbs did not take the chance to offer a measured or nuanced rebuttal of Obama’s critics. Instead, as if to unwittingly prove the President right, Dobbs “doubled down” in his own way, saying:

“Well the bad boys and girls…how awful for the president that someone be critical of this president, who was supposed to be the great savior, the post-partisan, post-racial president who has been more polarizing than any in recent memory. It starts with “treating him like a dog”… poor him.”

“We’ve moved from Harry Truman’s “with the buck stops here” to Barack Obama with poor me. I mean, what is next? Is he going to be sucking on his thumb in a dark corner somewhere? this is time for a President to stand up.”

Dobbs’ critique is nothing but a classic straw-man argument: he is blaming Obama for something he didn’t do, namely being labeled by others as being post-racial and treated as a “savior.” True, there are numerous left-of-center media outlets and dopey fans that are deserving of this critique, not the president, for it’s really not fair to adjudge someones actions in light of the way they’ve been labeled by others.

There is plenty on which one can be fairly criticize President Obama and his rhetoric. But to criticize Obama’s candid assessment of how he feels that he’s been treated by the media by calling him a baby sort of proves the president’s point.