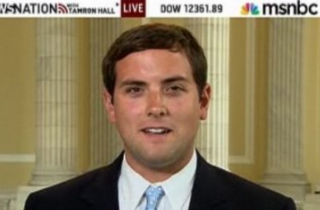 As “establishment” incumbent Republican Thad Cochran is poised to defeat tea party challenger Chris McDaniel, purportedly with help from Democratic and African-American voters (Mississippi is an open primary), Russert had this hot take to share with America:

So… only in America could something that could literally only happen in America happen. Unless some other country has a Republican Party, a state called Mississippi and — somehow — a significant population of African-Americans, Russert’s analysis makes zero percent sense. Or maybe it was a bizarre attempt at humor.

Either way, he took a beating from left and right:

.@LukeRussert maybe because the US has most of the African-Americans? And all of Mississippi?

Someone should hire this genius: https://t.co/DkiGmckUEW

In the future, all takes will be #smarttakes.

The future is now https://t.co/ypGhfJpxtu

This is true, only in Americaa can a political campaign happen involving votes from African-Americans. https://t.co/fFCKVbXrkS

Only in America can something happen that by definition can only happen in America > https://t.co/cNV7XAmVP9

For his part, Russert told one random Twitter user (while not directly addressing any of his detractors) that the tweet was simply a reference to Don King‘s Only in America:

. @manderson9692 You got it, the snarkers on Twitter didn't get the Don King reference, glad somebody did. Take care.