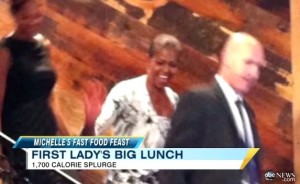 First Lady Michelle Obama made slow summer news Monday by visiting the newly-opened Washington, DC Shake Shack. Since the coverage focused not on the jolt such a visit could give business, or the reactions of locals, but on the First Lady’s calorie count, you might think this story was pushed by the usual conservative media suspects. Surprisingly, the story has been largely ignored by the conservative media, which didn’t stop Good Morning America from asking if the meal constitutes a “scandal.”

The Washington Post was first to break the “news” of the First Lady’s visit to the Shake Shack, focusing like a laser on the nexus of Mrs. Obama’s calorie count, and her anti-obesity Let’s Move campaign:

A Washington Post journalist on the scene confirmed the first lady, who’s made a cause out of child nutrition, ordered a ShackBurger, fries, chocolate shake and a Diet Coke while the street and sidewalk in front of the usually-packed Shake Shack were closed by security during her visit.

According to nutritional information on Shake Shack’s Web site, the meal amounted to 1,700 calories.

Given the conservative media’s history of gobbling this stuff up like deep-fried Twinkies, WaPo might have expected this item to get considerable traction on the right. While it did, indeed, garner a Drudge link (which went to a Fox affiliate who linked to the WaPo piece), it was largely ignored by everyone else. Hot Air mentioned it briefly as a tangent to the Paul Ryan “Wine-gate” story, The Blaze ran a piece on it, and Gateway Pundit’s Jim Hoft bit into the item with relish, but that was about it. A search of TV Eyes (along with radio silence on the story from Media Matters) reveals that Fox News has made no mention of the burger run. In fact, Drudge and Hoft were so disinterested, they couldn’t even be bothered to update when WaPo increased the calorie count, from 1556 to 1700.

I’m not sure whether this represents growth and maturity by the conservative media, recognition that even their own pundits find this line of attack idiotic, or maybe they’re just all punched out from their previous whacks at Michelle Obama, but it hardly matters. The mainstream media originated this story, promoted it, and despite a complete absence of anyone giving a damn, still managed to wonder if it was a scandal. From GMA:

Of course, it isn’t a scandal, no one’s saying it is. Only an idiot would think that a person who advocates better nutrition can never have an indulgent meal. Michelle Obama is actually setting a really great example, keeping in fantastic shape, and only occasionally rewarding herself with an all-American plate of goodness. You know how I know that? Because every time she eats a burger, it’s in the papers, and I count about five in the past three years.

The mainstream press used to just report these visits, and let the conservative media make federal cases out of them. Now, it appears, the right’s prior apoplexy over Michelle Obama’s nerve at wanting kids to eat healthy and only occasionally indulge, while also eating healthy and occasionally indulging, seems to have trained the mainstream media to pursue that angle long after they, themselves, have tired of it.