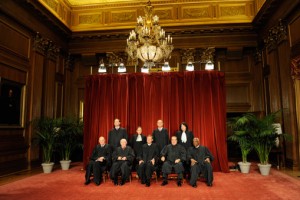 According to a new national survey by FindLaw.com, two-thirds of Americans cannot name a single U.S. Supreme Court justice. The survey, by the most popular legal information website, revealed that, even amid constant media attention of Elena Kagan‘s nomination to replace retiring Justice John Paul Stevens, only 35 percent of Americans can name a member of the Supreme Court.

Of those who can name a justice, Clarence Thomas is the most identified, at 19 percent. The newest justice, Sonia Sotomayor, was named only by 15 percent of people, despite a prominent, widely-publicized confirmation process last year.

The rest of the percentages are as follows:

Furthermore, many Americans think Justices David Souter and Sandra Day O’Connor are still sitting members, despite having retired in 2009 and 2006, respectively.

Only one percent of Americans could name all nine justices.

Regardless of these figures, Michael C. Dorf, a former Supreme Court clerk who currently teaches constitutional law at Cornell University Law School, said we should not be alarmed:

“Even though Supreme Court rulings can have a major impact on contentious issues such as the death penalty, abortion rights, discrimination and environmental protection, the Court issues its rulings as a collective body. After their 15 minutes before the Senate Judiciary Committee are up, Supreme Court justices rarely appear on television. What is a source for concern are polls consistently showing that many Americans are unfamiliar with basic features of our constitutional system.”

Dorf makes a valid point. According to Yahoo! News, the “American Revolution Center sponsored a national survey of 1,001 U.S. adults who took a multiple choice test. Before the test, 89 percent of respondents expressed confidence they could pass it; 83 percent went on to fail.”

Among some of the interesting findings:

“More Americans could identify Michael Jackson as the composer of ‘Beat It’ and ‘Billie Jean’ than could identify the Bill of Rights as a body of amendments to the Constitution.”

How much do you know? Take the quiz yourself and find out!