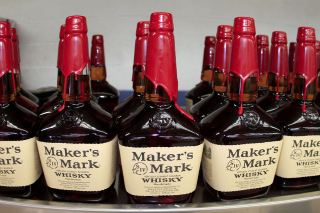 Some folks are vodka drinkers.

Others prefer beer (and when they do, they prefer Dos Equis).

Bottle of red, bottle of white…all depends on your appetite.

But when it comes to my go-to drink, the one that always does the trick, Maker’s Mark Bourbon has been my crunch-time QB for years.

Maker’s and Coke, to be exact. Our history goes back to my senior year of college, when a southern belle who was well above my pay grade turned me on to it at the Preakness Stakes. I never looked back. And despite all my fellow bourbon drinkers instructing me to drop the “Coke” part as a sign of maturity, I’ve stuck with both.

After all, if it ain’t broke…

If the Dallas Cowboys are America’s Team, bourbon is America’s drink. In fact, an Act of Congress in 1964 declared bourbon “America’s Native Spirit”, primarily for the long and storied legacy the bourbon industry owns in the United States.

So when the news hit last week that Maker’s would be watering down its offering from 90 proof to 84 due to what they called rising demand and inventory shortages, the reaction was the same at Happy Hours in bars and across the internet.

“Huh? Come again? If demand is increasing, why not just INCREASE the price or just make MORE of the stuff? But let’s NOT mess with a good thing (he often annoyingly does the CAPS thing to make a point).

So after a few days of relatively severe backlash via social media and outraged emails to the company, Maker’s was forced to squash the announced plan to water down its product.

To add it all up from a media perspective, Maker’s was able to generate three days of serious buzz:

The first day speculation on the alcohol reduction…

And a third day when the reduction “plan” was crushed.

So why the quotes around the word “plan”?

Because in my inconsequential yet sober opinion, this was all a calculated publicity stunt…right out of the New Coke playbook.

I was young at the time (1985), but from what I recall, the decision to change Coca-Cola to a sweeter offering (called New Coke) was one that was originally met with excitement and curiosity: What will it taste like? What will the new can look like? What does Pepsi, RC Cola and Fresca think about all of this? There was no internet, so all of these answers were left to newspapers and one’s imagination.

New Coke originally flew off the shelves, but nostalgia for the good ‘ol All-American stuff, along with the timeless bottles and cans, was too much to overcome.

So after just three months and 400,000 angry letters to the company later, the decision to bring back Old Coke/Coke Classic was made (for the young folks, the 400,000 letters sent was a huge number considering the effort around actually writing a letter using something called a pen, buying an envelope, stamp, and going to a mailbox to mail it in…which some argue is a bit slower than “signing” a petition on Facebook).

Get this: When the news of the switch back to Coke Classic hit, it was so big that the late Peter Jennings (ABC News) interrupted live programming to confirm the announcement. One U.S. Senator (David Pryor, D-AR) called the move “a meaningful moment in U.S. history”. Yup, this all really happened over a 12-week flavor change to a soda.

Just as it happened with New Coke, people flocked to stores and vending machines to get re-introduced to Coke Classic. By the end of 1985, Coke Classic was decidedly beating both New Coke and Pepsi in total sales. And just six months after Coke Classic hit the market, its sales had grown at more than double the rate of Pepsi’s.

Fast forward to February 17, 2013: Upon hearing the news that Maker’s would remain Maker’s Classic, I looked at the three bottles I stocked up on over the weekend…the three that would serve as my original stash to last 14-27 weeks before the watered down version was introduced.

Out loud and to no one in particular, I said, “Wow, I fell for it. They got me.”

You don’t know what you got until it’s gone.

In the case of Maker’s Mark, the company benefitted by the mere thought that its original concoction was going away.

No wonder I keep Maker’s and Coke in the same glass.

In terms of marketing ploys, intentional or not…they both deserve each other.