(UPDATE BELOW) Pedro Bravo is currently on trial for the murder of his University of Florida roommate Christian Aguilar. And yesterday, one piece of evidence in particular was presented by the police: Bravo reportedly asking the Apple helpmate Siri for help to get rid of his roommate’s body.

And it wasn’t something vague like “I need a place to hide something” or “Where can I find the nearest dump?” According to the screenshot provided by police, Bravo literally asked, “I need to hide my roommate.” 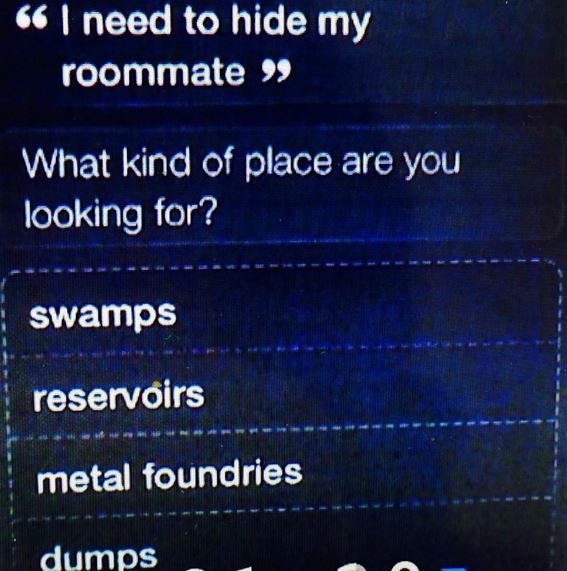 The police have also determined from Bravo’s phone that he was not where he said he was the night of the murder.

UPDATE — 1:02 pm: The screengrab of the Siri question was on Bravo’s phone, but the Gainesville Police said reports he definitely did so are incorrect:

Multiple reports of Bravo asking Siri to hide a roommate are incorrect… GPD Det. Goeckel certainly did not testify to that. #BravoTrial

This information on the Siri image is correct: http://t.co/7nrbzlC4BC. Thank you @CBSmiami @CBS4Ted for your attention to detail #BravoTrial

The link in that second tweet is to this report, which features this exchange between Bravo’s lawyer and Goeckel:

Bravo’s attorney pointed out the screen grab was among hundreds of pictures that were on Bravo’s phone and that the search may not have been initiated by his client.

“This is not evidence that he ever did an inquiry, looking for some information online for needing to hide his roommate,” Bravo’s attorney asked Gainesville police department Det. Matthew Goeckel who had taken the stand.