Man Posing as Congressman Able to Get Backstage During Obama Speech 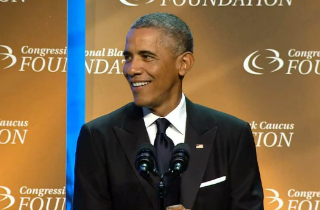 According to Bloomberg reporter Jonathan Allen, a White House official said an unidentified man posing as a congressman was able to make his way into the secure backstage area during President Barack Obama‘s late Sept. appearance at the annual Congressional Black Caucus Foundation awards dinner.

Pretending to be Rep. Donald Payne Jr., an actual Democratic lawmaker from the Newark, N.J., area, entered the private area either during or after the president’s speech, when various members of Congress had gathered to take photographs with Obama.

Bloomberg tells the rest of the story:

One member of the White House staff determined that the man wasn’t Payne, and another asked him to leave, the official said. He did so without incident and wasn’t detained.

The Secret Service did its job by screening everyone who attended the dinner, including the man, said Brian Leary, an agency spokesman.

“This guy went through security, fully screened,” he said.

Neither the White House official, nor another administration official aware of the incident, could say how close the man got to the president or First Lady Michelle Obama, who was also in the vicinity. Payne’s chief of staff, LaVerne Alexander, said yesterday that she had not been informed of the incident.

This story comes after Secret Service Director Julia Pierson resigned over several White House fence-jumping incidents, including one where the perpetrator made it inside the executive mansion carrying a knife.