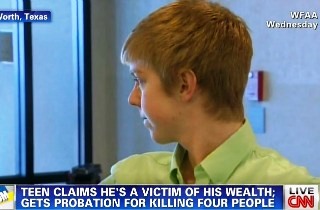 U.S. Marshals and the FBI Thursday officially joined Texas deputies in a manhunt for Ethan Couch, who disappeared alongside his mother shortly after a video surfaced of the teen allegedly violating his probation.

A Texas court issued a warrant for Couch’s arrest Wednesday; earlier this month, a Twitter user uploaded a video of Couch playing beer pong with a group of teenaged boys.

ya boy ethan couch violating probation. i got more if u want @CityofBurleson @TarrantCountyDA pic.twitter.com/otiGprQ1uD

Back in 2013, Couch killed four people after he drank beer, took valium, drove drunk, and barreled into a group of good samaritans helping a woman with a flat tire. His blood alcohol was three times the legal limit for an adult. In a controversial ruling, the judge sentenced Couch to ten years probation after the teen’s lawyers successfully argued that he suffered from “affluenza,” and could not be held fully responsible for his actions due to his life of privilege. Tarrant County Sheriff Dee Anderson criticized the decision to let Couch walk, telling CBS that he knew the teen would end up committing crimes in the future. “I hate to say I told you so, but I told you so,” Anderson said.

The sheriff also shared his belief that Couch and his mother have fled the country, telling Anderson Cooper his “gut feeling says they’ve gone a long way.” “They have the money, they have the ability to disappear,” Sheriff Anderson said. “I don’t believe they’re the kind of people who would have run a short distance. I believe they planned this.”

On CNN’s Newsroom Thursday, Nancy Grace slammed Couch and the “affluenza” case, calling it a “totally repulsive” situation that allowed the teen to avoid jail and slip away from authorities. Grace told host Brooke Baldwin, “It’s like a kick in the teeth… It’s never showing any remorse. He never looked the families in the face.”

For now, the search for the teen continues. If found, 18-year-old Couch could be charged with violating probation–a crime that carries up to ten years in prison. His mother could also face charges, including, as Grace noted, “aiding and abetting, harboring a fugitive, obstruction of justice — and that’s just for starters.”

Sheriff Anderson said the search will continue until authorities find the teen. “We’re not going to give up. We’re going come after you,” the sheriff said.