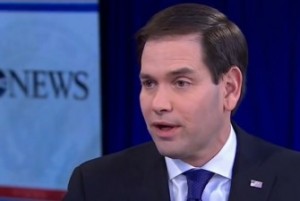 The single-most buzzed-about moment from Saturday night’s Republican presidential debate was Marco Rubio‘s repetition of a line about Barack Obama that he continued using even after New Jersey Governor Chris Christie busted him on it. On Sunday morning, Rubio returned to the scene of the crime, ABC News, and This Week host George Stephanopoulos led off the interview by asking Rubio “What went wrong” to make Rubio go back to that rehearsed phrase so many times.

Rubio took an interesting tack with Stephanopoulos, defending his repetition of the talking point by repeating it three more times:

STEPHANOPOULOS: But you’re getting pounded for repeating that speech.

RUBIO: Well, look, we raised more money last night in the first hour that debate than any other debate. As far as that message, I hope they keep running it and I’m going to keep saying because it’s true. Barack Obama — yes, has he hired incompetent people to implement laws and run agencies? Absolutely. But when it comes to the — what he’s trying to do to America, it’s part of a plan. He has said he wanted to change the country; he’s doing it in a way that is robbing us of everything that makes us special. I’m going to keep saying that because that not only is it the truth, it is at the core of our —

STEPHANOPOULOS: But even after Chris Christie called you out for what he called canned speeches, 25-second canned speeches, you repeated again, he says, there you go again. That was not a good moment for you, was it?

RUBIO: It’s what I believe. And it’s what I’m going to continue to say because it happens to be one of the main reasons why I am running. I — this is the greatest country in the history of mankind because of a certain set of principles. Barack Obama wants us to abandon those principles that he has spent seven years putting in place policies that rip them from us: undermining the Constitution, undermining free enterprise, undermining our standing in the world, weakening America, apologizing for us on the global stage. The reason why I’m running is if we elect someone like that for the next four years, I think it may be too late for American to turn around.

It’s an interesting move on Rubio’s part, right up there with Bill Cosby offering the judge a drink. Maybe for his next trick, Rubio will start showing up for interviews in an actual bubble.