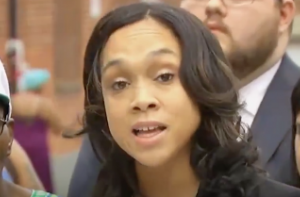 Baltimore’s state attorneys dropped their last set of charges for the officers in the case of Freddie Gray‘s death, but it didn’t stop Marilyn Mosby from going off on a searing rant about how the police resisted her every step of the way.

The attorney held a presser soon after the state announced their decision, where she passionately defended the legitimacy of her case in seeking justice for Gray’s death in a police van. Mosby said that her investigation was “fraught with systemic and inherent complications,” and that she saw a lack of cooperation from the police department that she described as “an inherent bias that is a direct result of when police police themselves.”

“We do not believe Freddie Gray killed himself,” Mosby said. “We stand by the medical examiner’s determination that Freddie Gray’s death was a homicide.”

Three of the accused officers were acquitted in previous rulings, and the prosecutors’ decision effectively brings the case to an end.

“Despite the challenges of not having an independent investigatory agency to work with us,” Mosby said, “we still are grateful for the opportunity to show the world the reality of the justice system from start to finish.”

Gray’s mother Gloria Darden was present at the press conference, where The Blaze reported that said “I know [the police] lied, and they killed him.”