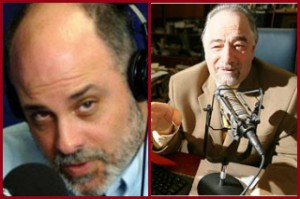 Mark Levin called fellow conservative radio host Michael Savage “a troll” and a “snaggletooth” Thursday night, another episode in a long-standing feud between the two hosts, each of whom thinks the other a phony.

Renaming Savage “Michael Weiner”—”He changed his name,” Levin said, “but you can’t blame him, he’s named after male genitalia”—Levin derided Savage as “a real cancer on this business. He is a phony, fake conservative. All you have to do is Google his name, Google ‘Allen Ginsberg,’ Google ‘Fiji,’ and all kinds of stuff comes up.”

Thursday’s diatribe came in response to Savage’s statements on other conservative radio hosts. “Now, he goes on the airwaves and trashes and he trashes a couple of my friends,” Levin said, “Rush [Limbaugh], Sean [Hannity], claiming they’re not conservative enough, you know like him.”

The grudge began when the two pundits hosted competing radio shows. Levin claimed he beat Savage and forced him out of the time slot.

“You little troll, you little nobody,” Levin said Thursday. “I kicked your butt in the ratings, head to head, one end of the nation to the other. That’s why you’re late night. Got it? I’d like you to come back at six pm, against me, eastern of course, so I could do it again, snaggletooth.”