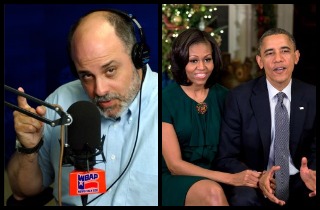 After First Lady Michelle Obama accidentally referred to herself as a “busy single mother,” talk radio host Mark Levin found himself noticing some “odd” things about the first family. Namely that President Obama appears to spend a lot of time away from his family, even when he doesn’t necessarily have to. Why, Levin asked, “are these two apart so often”?

“Speaking about the work/home life balance, the first lady said, “Believe me, as a busy single mother — or, I shouldn’t say, ‘single.’ As a busy mother.” Quickly catching her slip-up, she clarified, “Sometimes when you’ve got the husband who’s president it can feel a little single, but he’s there.”

Making the “very strange” observation, Levin added that he didn’t think the Reagans every vacationed separately because such a thing was essentially unheard of. He then stressed again how much golf Obama has played throughout his presidency, and how often that keeps him busy on weekends. “That’s a lot of time away from your wife and away from your kids,” he asserted. “And those kids, they’re teenagers.”

“He doesn’t have to do that, he wants to do that,” Levin pressed, referring to the Obama’s perpetual “campaigning.” The first lady’s comment then appeared not to surprise him much, as he later added, “I bet she feels like a single wife. She’s quickly — she’s embarrassed, [saying] he’s around. No, he’s not around!”

At least “not at much as he could be if he wanted to be.”

Levin was confident that the “lib media” would twist his words and draw different meaning from his remarks, but nonetheless went on to ask, based on the “odd” situation, “Why are these two apart so often and for such long periods of time?”