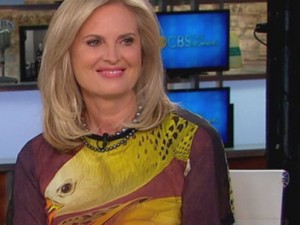 Former Massachusetts Sen. John Kerry‘s elevation to Secretary of State has left an upcoming job opening that Republicans are desperate to fill, so desperate that they’re even considering former future First Lady and owner of the World’s Most Terrifying Thousand-Dollar T-Shirt Ann Romney. While power-staring Mitt Romney* son Tagg Romney is also reported to be considering a run for the Senate seat that Scott Brown just passed on, The Boston Herald reports that top Republicans are buzzing about luring Ann Romney into the fray, a prospect that’s as enticing as it is unlikely.

From The Boston Herald‘s Joe Battenfeld and Hillary Chabot:

“I’ve had several people call me and ask about Ann Romney,” Ron Kaufman, a longtime friend and aide to the former Massachusetts governor and 2012 presidential candidate nominee, told the Herald.

Ann Romney’s inspiring battle against multiple sclerosis and her star turn on the GOP convention stage turned her into a popular national figure, especially among women voters in Massachusetts.

“That would be a very interesting thing. I would certainly love her to think about something like that,” said House Minority Leader Bradley Jones (R-North Reading).

But Kaufman said Mitt’s charismatic wife, who has never run for office, would be unlikely to take the plunge. “The timing is not great, and I don’t think she sees herself as a candidate,” he said.

Aside from offering liberal media types the chance to take a few more shots at Ann Romney, this story illustrates just what passes for a “popular national figure” among Republicans these days. Wonkette lib Rebecca Schoenkopf noticed something fishy about the assertion:

Is it just us, or does this story about her “surging” popularity manage to throw in every possible number but her approval rating? Did we just miss it? Can y’all doublecheck that for us? Anyway, this Hill story relays that as of October, her popularity rating was 56 percent nationally.

That ABC News story does fastidiously avoid actually assigning a numerical value to Ann Romney’s favorability, which is super-weird, but what’s even weirder is that the Hill story that Rebecca cites just flat-out gets it wrong. Ann Romney’s favorability rating in that poll was 52%, not 56%, with an unfavorable number of 31%. It seems like everybody really, really wants to like Ann Romney, and they want us to like her, too.

While a favorable/unfavorable ratio of +21 is nothing to sneeze at, it’s worth noting that former Sen. Scott Brown had a 52%/36% favorable/unfavorable rating just days before being defeated by current Senator Elizabeth Warren by 8 points, and it’s a lot easier to be liked when you’re just shouting “I love women!” than actually taking positions on things. Plus, she’d have to get past a primary with this guy.

The “energy” around a Romney run probably has less to do with exploiting a brand that screams “win” than it is about Republicans wanting to mount a semi-credible challenge for the seat, without wasting a lot of money on it. Running a candidate named “Romney” at least takes care of the latter.