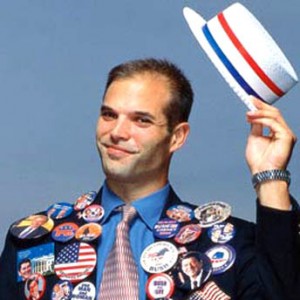 Daily Intel’s Jessica Pressler dug a pretty explosive anecdote out of a James Verini Vanity Fair article on Matt Taibbi‘s exploits publishing Exile magazine in 1990’s Russia, and now it’s making the rounds on blogs and Twitter. According to Verini, Taibbi reacted to some criticism with a meltdown worthy of Christian Bale. Verini should have known trouble was brewing when Taibbi threw coffee on him, but it didn’t end there.

I have some questions about this story, but let’s take this a step at a time. Verini describes how he showed up late for lunch with an already-reluctant Taibbi, to get some material for the article:

I mentioned some of the Exile pieces of his I planned to write about, and he said, “That was covered in the book.” I told him yes, that was true, but the book had been published in 2000, and, frankly, I didn’t think it was very good.

“Yes, the Exile book. I thought it was redundant and discursive and you guys left out a lot of the good stuff you did,” I said.

At this, Taibbi’s mouth turned down and his eyes narrowed.

So far, I’m with Taibbi on this. My mouth would “turn down,” too (some people would just call that “frowning”), if some guy I barely wanted to meet showed up late and told me I was doing him this favor because my work sucked.

“Fuck you,” he snarled, and then picked up his mug from the table, threw his coffee at me, and stormed out.

Wow, he went from zero to Joe Pesci in Goodfellas like that. Now, maybe I’m getting hung up on details, but here’s where the story gets a little dubious for me:

The restaurant was packed with customers, and they all turned to watch as I sat there, stunned, coffee dripping from my face. The waiter arrived with the milkshake Taibbi had ordered.

After Verini’s deconstruction of Taibbi’s scowl, there just seems to be something missing here. Like the part where he runs around the restaurant, screaming “My EYES!” Was it an iced coffee? That’s an important detail.

Here’s another question: At this point, why is your headline still “Lost Exile,” and not “Matt Taibbi Maimed Me With a Hot Beverage?”

But, I digress. Verini then follows Taibbi, who just threw coffee on him, out of the restaurant to try and talk him down:

After wiping myself off a bit, I went outside, where Taibbi was putting on his coat, and asked him to calm down and come back into the restaurant. He walked up to me, glaring, beside himself with rage.

“Fuck you!” he yelled. “Did you bring me here to insult me? Who are you? What have you ever written? Fuck you!” I tried to talk to him, but gave up when he walked away. I went back inside, paid the bill, left, and began walking up Sixth Avenue. Halfway up the block, I turned around, and Taibbi was behind me.

“Are you following me?,” I asked. He walked toward me, raising his arms as though preparing to throttle me or take a swing.

“I still haven’t decided what I’m going to do with you!” he said.

…But the anger in Taibbi’s eyes was genuine, and, after some more glaring, he fumed off. That was the last I saw of him.

So, the guy just threw coffee on you, which you survived by virtue of your hidden Wolverine healing powers or something, and now he appears on the street like Nosferatu, and you don’t give him a key-fisted throatpunch? Call a cop?

The really weird part is that Taibbi then ended up participating in the article anyway, via email, and none of those emails apparently said “BTW, sorry I assaulted you and stalked you like human prey afterwards. I’m switching to Sanka.”

The whole thing sounds like one of those apocryphal bad-boy-image-burnishing tales, like the Jake Tapper gum story. I don’t know Taibbi, I only met him once. He was in Philadelphia doing a segment on the Democratic primary for Real Time. We shot the breeze for about half an hour, and he sure didn’t seem like a hair-trigger psychopath. In fact, he kind of annoyed me by smiling too much. Am I a clown? Do I amuse you?

Don’t get me wrong, I’m not saying Verini made it up. How could he? It’s just a really weird story.

For the record, I tried (unsuccessfully) to get ahold of Taibbi to get his side of the story. If you’re reading this, Matt, maybe you can fill in some of the blanks.