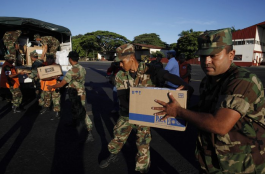 Here’s what I’m always curious about when I read Matt Taibbi’s blog posts: why did Rolling Stone let him go blog elsewhere? Taibbi penned various blogs at the mag’s website, which never accrued much attention, mostly because they were not updated with any regularity. But Taibbi is on fire over at True Slant and one wonders who at Rolling Stone is responsible for not providing him a similar platform/incentive — had they thought to the magazine might actually have a relevant online presence. Anyway! Yesterday, Taibbi took the sort of scorching rhetoric he usually levels at Tom Friedman and directed it elsewhere on the NYT op-ed page. Namely, David Brooks.

Brooks wrote a column last week shortly after the Haiti earthquake that took a rather harsh stand on international aid, and made a number of not terribly politically correct remarks.

The first of those truths is that we don’t know how to use aid to reduce poverty. Over the past few decades, the world has spent trillions of dollars to generate growth in the developing world. The countries that have not received much aid, like China, have seen tremendous growth and tremendous poverty reductions. The countries that have received aid, like Haiti, have not….We’re all supposed to politely respect each other’s cultures. But some cultures are more progress-resistant than others, and a horrible tragedy was just exacerbated by one of them.

It is notable that in the entire column there is no mention of U.S. backed dictators which absorbed much of the aid over the years. Anyway, Taibbi thinks the column is nothing more than thinly veiled commentary on “the problem of nonwhite laziness.” He does not mince words in his “Cliff’s Notes translation” of what Brooks actually meant. At all:

Although it is true that Haiti was just like five minutes ago a victim of a random earthquake that killed tens of thousands of people, I’m going to skip right past the fake mourning period and point out that Haitians are a bunch of lazy niggers who can’t keep their dongs in their pants and probably wouldn’t be pancaked under fifty tons of rubble if they had spent a little more time over the years listening to the clarion call of white progress, and learning to use a freaking T-square, instead of singing and dancing and dabbling in not-entirely-Christian religions and making babies all the fucking time. I know I’m supposed to respect other cultures and keep my mouth shut about this stuff, but my penis is only four and a third inches long when fully engorged and so I’m kind of at the end of my patience just generally, especially when it comes to “progress-resistant” cultures.

You can read the full “translation” here.