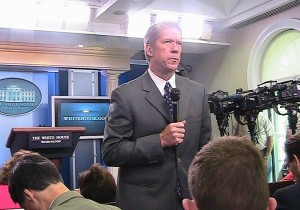 In the wake of Helen Thomas‘ untimely retirement, immediate speculation on who would get her front row-center seat quickly turned into (non-gleeful) consensus that it would be Fox News. This didn’t sit very well with liberal media watchdog Media Matters. Ironically, though, their faint damnation of Fox News Chief White House Correspondent Major Garrett actually undercuts their larger point about Fox News.

The thing you have to realize about Media Matters is that when they come to get you, you’re gonna get got. They have a massive team of researchers, so if you’ve ever said something screwed up, they will find 3 camera angles of you saying it. I’ve never gotten an email from them that didn’t have 19 or so separate examples of whatever point they were trying to prove.

So, when I got an email from them pushing back against Fox getting the front row seat, I was prepared for a full-out link salvo of Fox White House reporters promoting right-wing talking points. What I got was one example, and a weak one at that:

Just this past August, Fox News White House correspondent Major Garrett used his seat in the briefing room to manufacture a controversy over a supposed White House email “list,” a controversy he subsequently fanned by falsely claiming that the concept of a “list” was first broached by White House Press Secretary Robert Gibbs.

First of all, “just this past August?” They had to go back almost a year to find this? Even I piss off liberals more often than that, and I’m one of them.

Still, I remember this story, and I was critical of it at the time. Not to get into the weeds, there was a sharp exchange between Gibbs and Garrett on the subject of complaints Major was receiving from viewers who were getting unsolicited emails from the White House. In the end, the weak link here were those viewers, as the unwanted emails turned out to be related to human error, visitors to WhiteHouse.gov who used blast email addresses on the site’s contact page. The fact is, though, that it was a legitimate question to pursue, and the White House did change the procedure by which online visitors sign up for email updates, making it less passive.

I actually pursued a nearly identical story a month later, and even though the culprit turned out to be an error by a Newsbusters reporter, no one on the right called for my head.

To be fair, Media Matters’ case doesn’t rest entirely on their criticism of Major Garrett, but it’s really the only thing that matters here. The editorial bent of Fox News Channel as a whole is a separate issue, both with regard to their “opinion programming” and the way those programs can occasionally bleed through to their “straight” newscasts. Recently, Chris Wallace even alluded to it.

But the White House beat really is a different animal.  For example, when Robert Gibbs scolded Wendell Goler for remarks that were made on Fox programs, neither Goler nor Major Garrett waded into the fray. The back-and-forth played out between Gibbs and Neil Cavuto,.

Whatever you think of Fox News, whether you’re a fan or a detractor, I defy anyone to demonstrate that Major Garrett and Wendell Goler are anything but top-notch journalists. If a thorough outfit like Media Matters rests its case on who said the word “list” first, I think that point is proven. As such, they have earned their way into the front row.

It is understandable that many liberals would be rankled by this development, given Helen Thomas’ iconic status and Chris Wallace‘s recent, classless gloating. When it all shakes out, though, the seat that Fox ends up in might not even be Helen’s. To the extent that the center seat is more prestigious than other front row seats, Helen’s perch might end up going to one of the “Big 3” networks, with Fox taking a different front row seat.