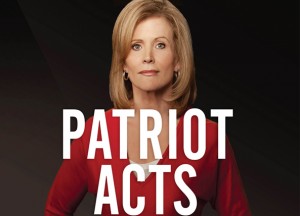 Catherine Crier is an Emmy Award-winning former District Attorney who became, at age 30, the youngest elected state judge in Texas history. She parlayed her legal knowledge into a successful television career, working at CNN, MSNBC, Fox News, and Court TV over the course of three decades, serving as host, anchor, reporter, and pundit. On Nov. 1, her fourth book (two previous books had become New York Times Bestsellers), Patriot Acts: What Americans Must Do to Save the Republic, was released. It explores the terrible state our government is in today, and forcefully goes after dirty politicians, operatives, and those who would like to use our constitutional system for short-term partisan gains.

Crier spoke with Mediaite this week on topics ranging from hydrofracking to which candidates she likes in the current crop of nominees. She also graciously autographed five copies of Patriot Acts. And in the spirit of the holiday season, we’re giving them away. The first five people to correctly answer all of the questions in the Crier Mini-Quiz, at the end of the interview, will become their new owners.

After reading the book, the first question that came to mind was: Are you planning on running for office anytime soon? Because you hit on some hot-button issues and actually take a stand on most of them.

No. I’m not interested in that. I was elected twice to the bench. It was an interesting experience. Very eye-opening about the political process. I’ve always been passionate about politics since I was a kid and this [book] is really just sort of a culmination of my own lifetime as an elected official, as a judge, as an investigative journalist, certainly as a political talk show host and a pundit.

So if you’re not running, you’re at least watching. Is there anyone at all in these debates that you like?

The one candidate, and I’ll be candid, that I think is intriguing is Jon Huntsman. He’s certainly got a record in the business community, but he’s also got a record in foreign policy, in a lot of substantive work, in several administrations from both parties. I think the man knows his stuff. I’m curious as to whether or not he might experience a little bit of a rise in the polls, now that he seems to be stepping his game up a little bit.

There’s a big rift right now on whether we need bigger government or smaller government. Where do you fall on this?

It’s not big or small government, but good government. There are things the government should do. There are certain issues and areas that should not be run with profit motives in mind. Yet there is an ideology in this country that has been growing — that everything private or everything based on stock returns and increasing profits is good. And I disagree with that. When a profit becomes the motive, then you can see a lot of people not served, a lot of things not done, and true damage done to something that is so necessary to the health, the well being, and the economic viability of a country.

Not to say at all that I don’t support a very healthy capitalist system. There are [just] certain areas where that is the appropriate action.

In your book, you touch on the water industry, and the privatization mess that briefly happened there. But this also kind of describes hydrofracking, which is just as intriguing, as far as the government and private enterprise criss-crossing.

I love the John Adams quote, “Ideology is the science of idiots.” And what I really try and do is look pragmatically. You’ve got to say, ‘What does empirical evidence demonstrate to us?’ And to say, for example, we need more energy, and natural gas is going to be a very important source, and, therefore, you completely deregulate the natural gas industry, come hell or high water. Whatever the cost. And I sit back and say, ‘No, you’ve got to look at what fracking is all about, what the consequences are.’ Yes, we need natural gas, but is there a need to regulate certain kinds of development in that arena? Do we need to check and double check the effects on water, the effects on, literally, the earth’s core and whether or not we are creating disruptions that can produce earthquakes?

NEXT>>>> Crier says politicians do the bidding of corporations, not the people. Plus: Free Autographed Books!