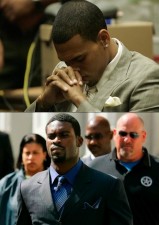 Judging by the breathless and obsessive media coverage devoted to Michael Vick, Plaxico Burress and Chris Brown, you’d think it’s a curse to be young, black and rich within today’s celebrity industrial complex. To be sure, each man allegedly broke the law in his own uniquely disgusting way, exhibiting unabashed cruelty, foolishness and rage, respectively. But in the American collective consciousness there’s a thin line between prolonged villainy and total forgiveness in the media, and we’re seeing that unfold as we approach both Chris Brown’s prime time interview with Larry King and the NFL kickoff.

The season will begin without Burress, a Super Bowl hero, who was sentenced to two years in prison for possessing the handgun with which he shot himself in the leg. And yet it’s widely accepted that he caught a bum rap, showing that the court of public opinion often works antithetically to our justice system. It will be a while before we see or hear from Plax again — he seems harmless, but he’s doing hard time.

And then there’s Vick and Brown, tumbling from their hard-earned pedestals due to violent acts, and yet all but forgiven by the courts. Their parallels are difficult to ignore: both were young, exceptionally talented, and wealthy before committing high-profile, dastardly crimes. But with their repentance tours simultaneously in full effect, who’s the biggest bad guy? Are either of them truly remorseful, and if so, do they have a shot at forgiveness or will they continue to be vilified? We run down their ongoing media narratives below.

Vick: As a quarterback at Virgina Tech, Vick was as flashy as he was fast. The playmaker’s quick feet lead to a Heisman Trophy nomination and Vick eventually became the first overall selection in the 2001 NFL Draft. That spring, Vick signed a six year, $62 million contract, the largest ever for a rookie at the time.

Brown: Chris Brown released his eponymous debut album at the age of 16, and the record went on to sell two million copies. With quick feet of his own, Brown was touted as a new school Michael Jackson, often paying homage to the King of Pop with his costumes and choreography.

Vick: In 2007, a federal investigation into illegal dog fighting activities at Bad Newz Kennels on Vick’s property lead to felony charges of financing an interstate gambling operation, in addition to participating in the dog fights. After his three co-defendents pleaded guilty, Vick followed, though the men “told of how Vick participated in the killing of dogs that didn’t perform well in test fights by shooting, hanging, drowning or slamming them to the ground,” according to ESPN.

Brown: Earlier this year, Chris Brown was charged with felony assault and making threats against his R&B singer girlfriend Rihanna. Although unidentified in police reports, a photo of the battered singer was ubiquitous in the following weeks, while details of the beating included Brown biting Rihanna, slamming her head against the car door and threatening to kill her.

Brown: After initially pleading not guilty, Brown accepted a plea bargain, pleaded guilty and was sentenced to community service, counseling and five years of probation.

Leading attackers in the press

Vick: PETA was steadfast in its condemnation of Vick, even withdrawing its offer to sponsor an anti-dogfighting PSA with the disgraced football star after his release. “Saying sorry and getting his ball back after being caught enjoying killing dogs in hideously cruel ways for many years doesn’t cut it,” said PETA President Ingrid E. Newkirk, who also recommended Vick undergo a brain scan and complete psychiatric evaluation.

Brown: Various women’s organizations and agencies against domestic violence spoke out repeatedly against Brown, especially after his light sentencing. Kim Gandy, president of the National Organization for Women said, “Paris Hilton got more jail time than Chris Brown did for beating a woman to a pulp,” while Rita Smith, executive director of the National Coalition Against Domestic Violence, was quoted as saying, “If we give them a break, we give them a shorter sentence or less consequence, it basically just says this wasn’t such a big deal.”

Vick: In his first interview upon release, Vick spoke with 60 Minutes, telling the television newsmagazine that he “cried so many nights” over the guilty he felt, and claimed to blame only himself. Yet his repentance was met by some understandable skepticism, as Vick came off something between cardboard and an opportunist — you could almost see the dollar signs in his eyes as imagined another NFL contract. Still, Vick was conditionally reinstated by the league and has since signed a one-year deal (worth $1.6 million) with the Philadelphia Eagles.

Brown: Chris Brown’s first public comment came in the form of a vague YouTube apology that left the performer looking wooden as he baldly read the cold, unspecific statement. After sentencing, Brown may have encountered a stroke of luck when a charming wedding video went viral, featuring one of Brown’s songs which then shot to the top of the iTunes chart. The singer may have squandered that fleeting goodwill, though, as we brace ourselves for his forthcoming interview with Larry King, set to air on Wednesday. In a particularly baffling preview, Brown tells King that he doesn’t remember “doing it,” only to release a statement blaming his amnesia on CNN’s editing.

When it comes to his villainous association, Vick is lucky enough to now have most of the Philadelphia faithful on his side, too hungry for a championship to care. Combined with the fact that he served his time and the crime hurt no humans, as soon as the man converts a third-and-short with a nimble QB sneak, the cheers will overpower the rest.

As for Brown, unless tomorrow’s appearance on Larry King Live is shocking in its self-reproach, the young singer has a chokehold on the title of Biggest Bad Guy. Only time will tell if we are truly a land of forgiveness, but sometimes a New York Post cover is hard to forget.

Though the sheer amount of press both Vick and Brown have received reinforces the cult of celebrity, it’s simply impossible to glean too much sympathy as long as details of these gruesome crimes are being reiterated. For all of their talent and contrition, both men are lucky to have any supporters at all; their respective fanbases have weathered a hell of a media storm, quite relentless in its unavoidable negativity. And yet maybe moral considerations are for naught, as it’s likely that regardless of the general public’s forgiveness, both men will have lucrative futures in the entertainment marketplace.