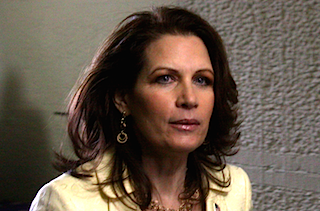 Rep. Michele Bachmann (R-MN), who will be retiring from Congress this year before making a possible second run at the presidency, said in an interview with conservative radio show Faith and Liberty this week that she believes the gay community wants to “do away with statutory rape laws so that adults will be able to freely prey on little children sexually.”

Bachmann said the gay rights movement’s main goal is to “not allow for a diversity of opinion” on the issue of whoever LGBT Americans should have the same rights as everyone else. “They don’t want to be celebrated,” she said. “They want to force everyone to not only agree with them, but also to finance their agenda.”

While she cited transgender rights as a current focus of the movement, Bachmann predicted that “multiples in marriage” would be next. From there, she jumped quickly to the notion that gay right groups want to “abolish age of consent laws, which means we will do away with statutory rape laws so that adults will be able to freely prey on little children sexually. That’s the deviance that we’re seeing embraced in our culture today.”

Bachmann has long been one of the most anti-gay members of Congress and during the Republican primary for the 2012 election was forced to defend a clinic run by her husband, Marcus Bachmann, that claimed to offer people a “cure” for homosexuality. Earlier this year, she accused the gay community of “bullying” the American people and “intimidating” politicians.

Listen to audio below, via Faith & Liberty: