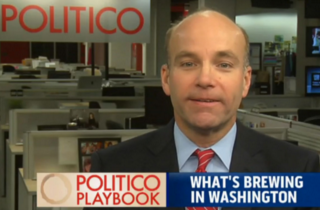 Politico‘s Mike Allen is in hot water again over his practices when it comes to running the extremely popular morning round-up, Playbook. Only two months ago, he was outed for promising Philippe Reines that Chelsea Clinton would get “no-risk” questions if she agreed to an interview in 2013. (He seems to do this a lot.) He apologized but emails with Reines are continuing to come back to haunt him.

According to Gawker, in 2010, Allen just went ahead and allowed Reines — longtime Clinton friend and former State Department spokesperson — to write a whole blurb about the State Department for Playbook, which goes out under his byline. Reines was serving under Clinton at State when the emails were sent.

Here is how the draft from Reines looked:

Premiering tonight at 9pm on the National Geographic Channel (both regular and HD!): “Inside the State Department” For over a year the Secretary of State’s soft-media savvy team gave the documentarians unprecedented access to every corner of the Department, including to HRC herself both here in Washington, DC and abroad.

The movie, a serious behind-the-scenes look at the work of State’s 60,000 workforce globally, was screened to rave reviews last month before a standing room only crowd at NGC’s headquarters on 17th Street, and feature many faces familiar to Playbookers.

From the release: “In a planet full of conflict, America faces challenges like never before. Inside the Department of State follows US Secretary of State Hillary Clinton and her team of top advisors into some of the most embattled regions of the planet. Travel behind the scenes on some of Clinton most crucial overseas missions to date: including trips to Pakistan, Israel, Egypt and Afghanistan. Each missions sheds new light on the machinery & strategy of American diplomacy.”

* WARNING: allowing your Cabinet-level boss to watch may be detrimental to your professional health and result in the ultimate annoying question: Why can’t I get something like this done about ME?!

If you do get that question, blame Caroline & Philippe.

Here is how it later appeared on Politico:

VIEWER ALERT — Premiering tonight at 9 on the National Geographic Channel (regular and HD!), “Inside the State Department”: For over a year the Secretary of State’s soft-media-savvy team gave the documentarians unprecedented access to the Department, including to HRC herself, in D.C. and abroad. The behind-the-scenes look at the work of State’s global workforce of 60,000 was screened to rave reviews last month before a standing-room-only crowd at NatGeo, and features many faces familiar to Playbookers. Video preview http://on.natgeo.com/cEjqAs

It is certainly a condensed version, but Reines’s words regarding his boss and colleagues are still as he wrote them.