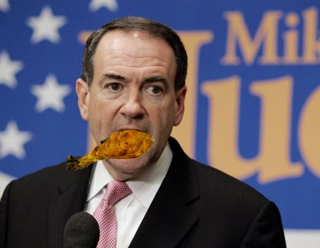 Here in America, a nation founded on the principles of fairness and equality, there is a terrible injustice going on. In our country, a country where we thought people were free, a group is being horribly oppressed. That group, of course, is fast food chicken chain Chick-fil-A. Their God-given right to oppress gay people has been totally ruined by the decision of some people to say totally mean things about them. Fortunately, Mike Huckabee is here to save the day and defend Chick-fil-A’s right to be anti-gay!

But, let’s back up. For those of you who don’t know why Chick-fil-A needs to be appreciated, the story is this; Chick-fil-A is actually a super religious corporation. How religious? Religious enough to always be closed on Sundays…and also give millions of dollars to anti-gay groups over the years. In case people weren’t getting the message from that, CEO Dan Cathy did a couple interviews last week in which he helpfully explained that gay people marrying the love of their life was “inviting God’s judgment on our nation.”

America responded quickly. Comedians began mocking the brand around the clock, the Mayor of Boston vowed to keep the chain out of his city, the Jim Henson Company has decided to stop making toys for their kid’s meals, and more.

As you can imagine, this is in danger of hurting Chick-fil-A’s feelings (read: “sales”). Fortunately, the good, honest people of the country can unite to protect the restaurant thanks to Mike Huckabee’s Chick Fil-A Appreciation Day!

“I have been incensed at the vitriolic assaults on the Chick Fil-A company because the CEO, Dan Cathy, made comments recently in which he affirmed his view that the Biblical view of marriage should be upheld. The Cathy family, let by Chick Fil-A founder Truett Cathy, are a wonderful Christian family who are committed to operating the company with Biblical principles and whose story is the true American success story. Starting at age 46 Truett Cathy built Chick Fil-A into a $4 billion a year enterprise with over 1600 stores. At 91, he is still active in the company, but his son Dan runs it day to day as CEO.It’s a great American story that is being smeared by vicious hate speech and intolerant bigotry from the left.

I ask you to join me in speaking out on Wednesday, August 1 ‘Chick Fil-A Appreciation Day.’ No one is being asked to make signs, speeches, or openly demonstrate. The goal is simple: Let’s affirm a business that operates on Christian principles and whose executives are willing to take a stand for the Godly values we espouse by simply showing up and eating at Chick Fil-A on Wednesday, August 1. Too often, those on the left make corporate statements to show support for same sex marriage, abortion, or profanity, but if Christians affirm traditional values, we’re considered homophobic, fundamentalists, hate-mongers, and intolerant. This effort is not being launched by the Chick Fil-A company and no one from the company or family is involved in proposing or promoting it.”

So gather ’round, good people! Eat your chicken proudly, look to the sky, and shout to the heavens, “Hello, world! In the year 2012, I still somehow believe that keeping a group of people from having the same rights as I is not bigoted! It’s Christian! Yummy yummy chicken!”