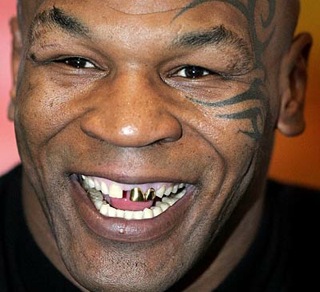 Mike Tyson has some opinions about Sarah Palin. The following audio probably needs little more introduction for one familiar with the contents of Joe McGinniss‘s new book The Rogue, and yet no description could do the astronomical levels of insult in this clip justice. Attempting to compliment alleged Palin paramour (of several decades ago) NBA star Glen Rice as a “wonderful man,” Tyson found said tryst hilarious, and suggested Dennis Rodman as a more suitable mate for Palin instead. It only went downhill from there.

Tyson was a guest on the KWWN program “Gridlock,” where the hosts cackled and guffawed in harmony at Tyson’s every deplorable comment. “You want her to be with someone like Rodman,” Tyson “joked,” making several graphic descriptions of sex involving “guts” and wombs and various other organs that will make you nauseous at even the thought of sex for several months to come. He then made an Important Point About Race In America™: “Most of these girls– most of them in life in general… every white girl, uppity middle class [say] ‘get me a black man before I get into this white world.'” He then noted that the end of racism will come when “we keep having sex with each other until we all start looking like one another.”

Tyson did conclude that “Sarah, she’s so cool,” but then continued to make gross jokes about sex using the sort of crass, nonsensical middle-school humor that makes Tucker Max sound like George Carlin.

There’s a lot to lament in this audio– first and foremost that a legendary boxing champion of Tyson’s caliber could be reduced to Charlie Sheen-levels of violent madness, but that analysis is a job for our pals at Sportsgrid, who seem to still be stunned in disbelief at this audio. Beyond the self-destruction of a man previously possessed of supernatural talent and discipline, however, there are seriously disturbing sociological themes brought up herein. Sure, all the implications of what sex is like with a black man (because, apparently, all black men are the same in Tyson’s world) are as offensive as the metaphors Tyson employs to communicate them. The fact that someone convicted of sex crimes is even talking about sex– and visualizing it in such disturbingly gross ways– presents its own set of problems worth its own column (would we let any other convicted rapist talk about sex so openly and violently like this over mass media?). Even his compliments to Rice as a “sweet man”– and, therefore, somehow not entirely “black” like Rodman– are extremely concerning, too.

But it is the argument that “every white girl” needs a black man in their lives at some point– that race is such a poignant divide between human beings that its influence cracks through even the most intimate of human relations by necessity, that is the most hurtful to society at large. “Get me a black man,” he says white (whatever “white” may mean is unclear, as plenty of ethnic differences abound as well) women say before they go off “into this white world.” The white women that populate Tyson’s world require relations with someone who is black– simply because they are black– as a ritualistic rite of passage into womanhood.

It is absurd when put into those terms, but it’s hard to imagine at least some people listening didn’t identify and relate with this myth when Tyson stated it as “get me a black man before I get into this white world.” The implication is that race so proudly defines the essence of human beings that it slices and cracks through the various layers of human interaction, tainting the most intimate of these. To argue that race hasn’t entangled itself in the romantic situations of many, even today, would be naive, and some from whom the nuance separating the acknowledgment of race as an issue and Tyson’s sweeping comments may feel an impulse to defend the latter. Tyson’s comments mandate the presence of race in such intimate decisions as a given– not as a failure of our society– and for this insults the intelligence of Americans black and white alike.

The tragic (and yes, listening to Tyson like this is “tragic” first and foremost) audio below. Warning, it is stomach-churning and absolutely NSFW: