Minecraft, but for Journalism: Newspaper Invests in Virtual Reality Reporting 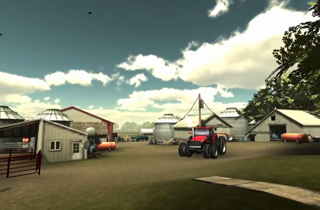 Today, the Des Moines Register and Gannett Company is undertaking a crazy new virtual reality experiment, in the hopes that people are willing to consume their news in the same way that they play Minecraft and BioShock: By walking around with a computer on their face.

“Harvest of Change,” a virtual reality five-part story about the shifting agricultural industry in Iowa, allows readers/gamers to explore a real farm that’s been rendered in CGI, and there’s a twist: it can be viewed through the Oculus Rift, a “virtual reality head-mounted display” currently in development and meant to be used with video games. Instead of, say, fighting a psychopath computer, users can interact with farmers, watch calves being born, ride tractors, and get a sense of the fragility of the American heartland.

“This is the way we, as journalists, are going to need to communicate to the Minecraft generation,” Gannett Digital Vice President/Product Mitch Gelman, told Poynter, adding that the project was aimed at young’uns “who essentially are not picking up a newspaper from their front porch or sitting down in front of Brian Williams.”

While shiny new virtual reality journalism isn’t new, the prospect of using Oculus Rift as a form of journalism has intrigued newspapers — as well as rankled detractors:

“I applaud the forward thinking,” said University of Minnesota Journalism Professor Nora Paul, “but I think this is the kind of thing that’s going to be a curiosity.”

Paul, a former Poynter faculty member, has studied the use of computer games in journalism and says it’s hard to predict whether virtual reality will become an effective way to tell stories. She says previous attempts to marry gaming technology and news storytelling had mixed results.

“Most people felt like putting a game skin on serious news content was a distraction,” Paul said, “and gamers weren’t interested in doing it because it invariably wasn’t a very sophisticated game.”

Watch below via the Des Moines Register: