Minnesota Gay Community Apologizes To Sen. Amy Koch For The Ruination Of Her Marriage

MN Gay Community Apologizes To Sen. Amy Koch For The Ruination Of Her Marriage 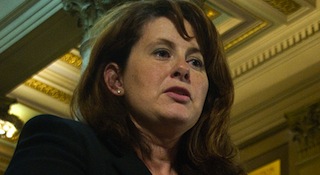 Earlier this year, Minnesota State Senator Amy Koch was one of the many Republicans campaigning for a Constitutional amendment banning same sex marriage so as to protect the holy sanctity of marriage. This week, Koch apologized for cheating on her husband. There is clearly only one possible explanation; that all those marrying gays ruined Koch’s marriage. What jerks. Fortunately the gay community of Minnesota has been thoughtful enough to apologize.

John Medeiros, a gay man from Minneapolis, was kind enough to write an open letter to Koch on behalf of “all gay and lesbian Minnesotans” expressing just how terrible they feel for forcing her to begin an extra-marital affair through all their horrible gay marriage talk:

On behalf of all gays and lesbians living in Minnesota, I would like to wholeheartedly apologize for our community’s successful efforts to threaten your traditional marriage. We are ashamed of ourselves for causing you to have what the media refers to as an “illicit affair” with your staffer, and we also extend our deepest apologies to him and to his wife. These recent events have made it quite clear that our gay and lesbian tactics have gone too far, affecting even the most respectful of our society.

We apologize that our selfish requests to marry those we love has cheapened and degraded traditional marriage so much that we caused you to stray from your own holy union for something more cheap and tawdry. And we are doubly remorseful in knowing that many will see this as a form of sexual harassment of a subordinate.

It is now clear to us that if we were not so self-focused and myopic, we would have been able to see that the time you wasted diligently writing legislation that would forever seal the definition of marriage as being between one man and one woman, could have been more usefully spent reshaping the legal definition of “adultery.”

Forgive us. As you know, we are not church-going people, so we are unable to fully appreciate that “gay marriage” is incompatible with Christian values, despite the fact that those values carry a biblical tradition of adultery such as yours. We applaud you for keeping that tradition going.

And finally, shame on us for thinking that marriage is a private affair, and that our marriage would have little impact on anyone’s family. We now see that marriage is more than that. It is an agreement with society. We should listen to the Minnesota Family Council when it tells us that marriage is about being public, which explains why marriages are public ceremonies. Never did we realize that it is exactly because of this societal agreement that the entire world is looking at you in shame and disappointment instead of minding its own business.

From the bottom of our hearts, we ask that you please accept our apology.

Well, at least they know what they did. However, there are still a bunch of gay people out there wearing shiny rings on their finger and, thus, magically forcing heterosexual people to not have perfect marriages, something they clearly would have otherwise. If only all gay people can be as kind as the Minnesotan bunch and apologize for the trouble they’ve caused.