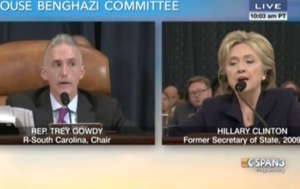 From a cable news and Twitter perspective, the Benghazi hearing today was custom-made for polarized audiences far and wide: 97 percent who watched or listened or followed their Twitter feed had their minds made up on guilt or innocence well before the first question was asked. You either strongly believe Hillary Clinton is lying or you think this is all a witch hunt to injure her presidential hopes. And no matter how things ended today — no matter what you heard — you believed what you wanted to believe.

Actually, check that: Probably a solid majority believed both: Hillary is lying and it’s a partisan witch hunt on the part of the GOP to damage the likely Democratic nominee. But credibility and honestly are two things for those who plan to vote for Mrs. Clinton that is superseded ten-times over by hatred of the Republican party. Does HRC17 tell invalid truths so often and is so bent on becoming the second-most powerful person in the world (behind Vladimir) that she doesn’t even know the difference between fact and fiction anymore? Yes. Do her supporters really care about integrity to the point they’ll vote for whomever the GOP nominee is instead? Of course not. That’s just the world we live in now, and it’s sad.

So we hear the analysis from the professional political chattering class across the spectrum and the basic gist is mostly this: Because Trey Gowdy and Company couldn’t get the former Secretary of State to admit she ordered what is the non-fictional version of the Code Red (or in this case, a stand-down order that allowed four Americans — including an Ambassador — to be slaughtered at the hands of terrorists), the committee failed. We’ll rightly also be told that today’s event won’t have any effect on the Clinton machine bulldozing the disturbingly weak bench that is the rest of her “competition” on her way to the nomination. Hillary didn’t break like Colonel Jessup = Victory.

If you’re a producer back in the newsroom looking to condense almost seven hours of testimony into a nice, neat package, you’re trained to look for the “best” SOTs (sound on tape). Not necessarily anything based in substance, of course, but where the fireworks occurred. That’s why you’ll see Elijah Cummings featured prominently tonight and through the weekend. Not for any substantial reason, of course, but because he raised his voice, even raised a finger… well, that’s huuuuuge. Just as it was in the first GOP debate, which basically had on a loop the following day a rather inconsequential (but loud and contentious) exchange between afterthoughts Rand Paul and Chris Christie. You yell, you act pissed, you will get airtime in any cable news coverage afterward… actual content of what’s being voiced be damned.

Hillary Clinton testified again on Benghazi today, sometimes things got awkward, heated. The takeaway in our polarized media will either declare the proceeding was either damaging-but-not-devastating-for her or a non-event, perhaps even a net-plus.

And unless there’s a blue dress and DNA involved, any Clinton will deny and deflect until the public becomes damn tired of hearing about it. It’s a strategy that’s worked before and may work again. Drip. Drip. Drip until the handful of independent voters still left doze off.

Many watched today, many will catch up after getting home from work. It continues now into this Thursday evening. Not one mind will be changed as a result come 382 days from now on Election Day.

But we all tune in for the theatre anyway… with some hoping someone can’t handle the truth… or admits to ordering the Code Red.