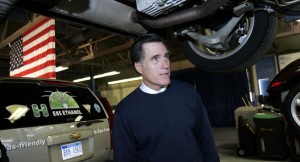 Steve Rattner (a former Counselor to the Secretary of the Treasury, a position that saw him lead efforts to restructure the flailing auto industry) wrote a blog post yesterday highlighting Mitt Romney‘s inconsistency when it comes to discussing the auto industry.

It would appear, writes Rattner, that Romney was for Barack Obama‘s plan to rescue the nation’s troubled auto companies before he evidently turned against it. As an example, Rattner points to a 2008 op-ed piece Romney wrote for The New York Times, wherein the former governor of Massachusetts echoed many of the President’s plans. He writes:

Back in November 2008, he wrote a New York Times Op-Ed piece that was headlined, “Let Detroit Go Bankrupt,” an apparent suggestion that Washington should have kept its hands off of Detroit. Except if you read the piece, its half-dozen main points were eerily similar to the plan that President Obama’s Auto Task Force ultimately designed. Eliminate the Detroit companies’ cost differential with the foreign “transplants” operating in the south. Change management. Cut pay and get rid of perks like private airplanes. Focus on the long-term. Arrange for “managed” bankruptcies with government guarantees for post-bankruptcy financing and warranty protection.

This is a marked difference from the way Romney would later respond to Obama’s initiatives:

But the moment that President Obama unveiled his plan, Romney denounced it, using words like “tragic” and “a very sad circumstance.” More recently, his spokesman, Eric Fehrnstrom, tried the Romneyesque approach of arguing both sides of the question at the same time. “Mitt Romney had the idea first,” Fehrnstrom argued, pivoting quickly to accuse President Obama of “propping up” the auto companies.

Today, Romney was met by a group of protesters in his native Michigan, protesters who are unhappy with his stance against a government bailout for the auto industry. To Rattner’s point, Romney today told the Detroit Free Press that the Obama administration “finally did what I told them they had to do” and essentially oversaw a “managed bankruptcy” for General Motors and Chrysler that he called for in the 2008 piece.