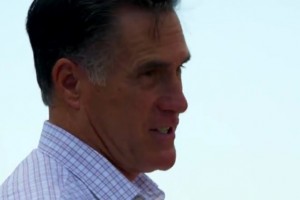 Republicans are famous for ginning up outrage over comments they find insufficiently patriotic, but in a new web ad, released on July 4th, Mitt Romney blithely tells Americans they can no longer “walk a little taller and stand a little straighter” because we’re Americans.

While Romney’s message is that America will stop sucking if we elect him president, the line (from a June 15 speech in New Hampshire) reveals how his values diverge significantly with many Americans’.

The ad, entitled “The Best of America,” starts out with what sounds like Wilford Brimley reciting the entire Pledge of Allegiance over a mixture of historical film clips and images of somber-faced Americans. Then, Republican nominee Mitt Romney appears onscreen to talk about all the hardworking quiet heroes he meets everywhere he goes.

As his speech progresses, the ad shows gauzy clips of Americans doing things like practicing ballet, shooting a basketball, but most of all, shaking hands with Mitt Romney.

“There was a time – not so long ago,” Romney says, “when each of us could walk a little taller and stand a little straighter because we had a gift that no one else in the world shared. We were Americans.”

“Those days are coming back,” he adds. “That’s our destiny.”

One of the odd things about this ad is the seemingly random use of a prop plane sound effect, but it turns out there were actual airplanes buzzing Mitt Romney’s event during that speech, one of which belonged to MoveOn.org.

The other odd thing is that I’m struggling to figure out the difference between what Mitt Romney said, and the Aaron Sorkin-penned “America is not the best country in the world” monologue from The Newsroom. Personally, I don’t have any problem with the idea that America can do better, the same idea that has right-wingers foaming at the mouth when Chris Rock says it, but there’s something else wrong with Mitt Romney’s formulation.

“There was a time – not so long ago – when each of us could walk a little taller and stand a little straighter because we had a gift that no one else in the world shared. We were Americans.”

The key to Romney’s electoral strategy is the notion that he is the one to lead us out of the toughest economic times this country has seen in generations. Regardless of whom we blame for that devastating economic crisis, Americans without a doubt have many strong emotions about it; anger, frustration, the scar tissue of disillusionment and disappointment.

There’s one thing we don’t have, though, and that’s shame. The loss of millions of jobs, of homes, of life savings have been devastating, for sure, and everyone agrees that things aren’t getting better as quickly as we need them to. We disagree as to why that is, but no man who spent honest money to buy a house, only to see that home’s value cut in half by forces outside his control, has any reason to feel shame, nor do those who lost jobs to an economy in freefall. We can all still stand tall and straight because we do what’s right, we work hard to make our lives, and our country, better.

American pride doesn’t spring from a well of material possessions, from the wealth and prosperity that Mitt Romney worships. It’s the exact opposite.