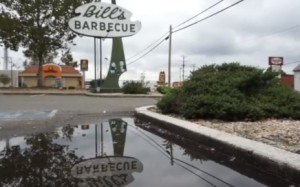 Mitt Romney‘s campaign has already pioneered nano-targeting with their Lyme Disease mailers, but now, they’ve shrunk down their appeal to the size of a plate of pulled pork, releasing an ad that attacks President Obama over the closing of “Bill’s Barbecue” in Richmond, Virginia, an 82 year-old barbecue chain that couldn’t afford to upgrade their restaurants. ThinkProgress is pushing back by pointing out the restaurant’s health code violations and other Virginia joints that are doing great, but the ad really begs the question: If “Bill’s Barbecue” is such a great business, why doesn’t Mitt Romney shake the loose change out of his couch cushions and save it?

The ad itself is the type of bleeding-heart appeal that should drive conservatives nuts, with sepia-toned nostalgia over the restaurant’s exploitation of child labor. “As a little girl, I can remember we would come by in the afternoons or on Sundays, especially after church, and daddy would go to work, my brothers would go to work and I got to do, washing the glasses behind the counter, so that was my job,” Bill’s Barbecue President Rhoda Elliott says, before tearing into President Obama like a plate of spare-ribs. “When President Obama took office there was a lot of hope that things were going to change. Well, he didn’t change anything.”

It’s all very sad, except for the part where Rhoda refuses to accept personal responsibility for the failure of her business. Suddenly, Mitt Romney agrees that she didn’t build that.

Now, ThinkProgress arguably went a little small when they pointed out the chain’s health code violations, but they rightly zero in on Romney’s free-market hypocrisy. If it’s President  Obama’s fault that Bill’s Barbecue couldn’t afford to upgrade its 82 year-old restaurants, surely this is also his fault:

The Richmond Times Dispatch noted that other barbecue companies are expanding in the Virginia capital area. “Virginia’s Finest Barbecue,” a Richmond-based barbecue blog wrote at the time of the closing that “Bill’s needed a face lift. It seemed they were still stuck somewhere between the 70′s and the 30′s, the good ol days for them,” and observed that ” the success of a few other Richmond bbq restaurants around town that have slowly eaten Bill’s business away.”

And while Mitt Romney is pretending to give a damn about Rhoda and her heart-tugging predicament, he’s got enough money to gold-plate every inch of those restaurants rattling around with the random batteries in his junk drawer. Just because he’s rich doesn’t mean he should have to rescue every hard-luck case he comes across, but the fact that he hasn’t in this case means he sees a loser when he knows one.

There’s also a bit of clever dishonesty to the ad, which poses Rhoda as just another down-on-her-luck business owner. There’s a reason she uses the lawyerly phrase “there was a lot of hope” when President Obama got elected, because she apparently didn’t share that hope. Rhoda Elliott was part of a consortium of Virginia business owners who endorsed John McCain in 2008. That means there’s a decent chance she voted for George W. Bush, the guy who crashed the economy in the first place, and whose mess she blames President Obama for not cleaning up fast enough. Now, she wants you to vote for the same guy, minus the decent immigration policy and marginal foreign policy literacy. America’s had enough of that special sauce.