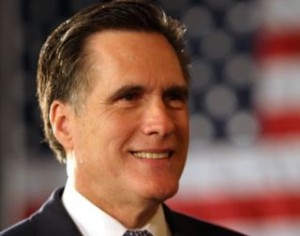 In what is sure to be a parade of Republican figures ignoring or downplaying President Obama’s pitch-perfect handling of dictator Colonel Muammar Gaddafi, former Massachusetts Governor Mitt Romney reacted to news of the tyrant’s death, in an interview with Iowa radio station KSCJ, by saying, “It’s about time.”

Romney, who was among a raft of conservatives critical of the President’s Libya policy, added, “The world is a better place without Muammar Gaddafi.”

Romney also tweeted, earlier today, “Muammar al-Qaddafi was a tyrant who terrorized the Libyan people and shed American blood and the world is a better place without him”

Whether he intended to or not, Romney’s reaction underscored the contrast between the Bush-era foreign policy that Romney espoused in March, and the results that the Obama administration has achieved by ignoring it. President Obama’s approach to Libya led to the overthrow of the Gaddafi regime in six months, and the killing of the dictator in eight, all without a single US casualty. Considering the two Bush-era Middle East wars that are still going on today, and the nearly eight years the Bush administration spent not capturing Osama bin Laden, “it’s about time” seems like a particularly counterintuitive reaction.

President Obama has built a record on terrorism that, despite its strength, probably won’t benefit him much in the upcoming election. However, attempts by Republicans to belittle or ignore that record, and the accomplishments of the US forces that contribute to it, can only be a political liability for Republicans. In this case, if they can’t say anything nice, they’d be better off saying nothing at all.