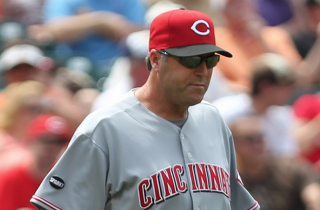 When it comes to legendary spittle-flecked rants from Major League Baseball managers, this one might take the cake. After Monday evening’s victory over the Milwaukee Brewers, Cincinnati Reds manager Bryan Price took issue with a reporter’s question about why the team’s catcher hadn’t traveled with the team during their weekend stint in St. Louis. The result was a five-and-a-half-minute tirade loaded with 77 f-bombs and several references to fecal matter.

Cincinnati Enquirer reporter C. Trent Rosecrans posted the entire transcript online, but here’s just a snippet of what Price had to say about the media and their question-asking ways:

Price also complained that the media’s need to ask questions is “making my job f****** harder,” according to the transcript.

And then his rant continued with this lecture on the state of sports journalism:

Got that? Oh, and there’s more. Lots more.

After the transcript became national news, the manager released a statement through the Reds’ official Twitter account:

Bryan Price – “In my pre-game conversation with reporters yesterday, I used wholly inappropriate language to describe….

…. the media coverage of our team. While I stand by the content of my message, I am sorry for the choice of words.”

Now, you’re likely asking: Is there audio of the rant? Yes, there was. As Deadspin pointed out, Enquirer staff originally promoted the audio clip — and then it was later removed from the Gannett website under mysterious circumstances. But, of course, intrepid readers managed to rip the clip before it was deleted. Listen to a portion below: