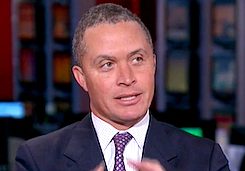 On Dec. 7, we posted about former Rep. Harold Ford Jr. (D-TN) — a previous regular on Morning Joe whose appearances ceased after he was fired from his position at Morgan Stanley. The reported reason was an allegation of sexual misconduct. But now, Morgan Stanley is denying that was the cause of Ford’s termination.

In a statement provided to Mediaite, Morgan Stanley said that reports Ford was terminated over a misconduct allegation were erroneous.

“We have not received any internal allegations of sexual harassment or misconduct involving him either before or after his separation became public,” the statement said. “As previously stated, his separation was based on corporate policy.”

Morgan Stanley’s statement did not specify what that corporate policy was.