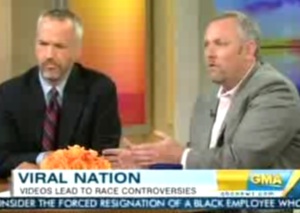 Judged purely by their back and forth on Twitter over the last six months, its safe to say that Andrew Breitbart and Eric Boehlert are not very fond of one another. In fact, it’s fair to say that they each hold the other in the lowest possible esteem. So it was with great anticipation that followers of both feisty Internet personalities tuned into Good Morning America this morning to see the pair debate the Shirley Sherrod controversy.

Alas, the burden of unreasonable expectations about the head-to-head seemed to extinguish the flames of passion, as both Breitbart and Boehlert were not only on their best behavior, but sadly, were also kind of..well, boring. Mediaite was able to speak to both gentleman shortly after the taping, and both agreed that the meeting was not only respectful, but verged on convivial.

While heading to JFK to catch a flight back to his home base of operations in Los Angeles, Brietbart explained that the reason behind his low energy was due to lack of rest from the Shirley Sherrod story. “I honestly had not slept in 40 hours. So when I entered the studio i was in a dream-like state that seemed more surreal the moment I saw Eric Boehlert.” So – how was the first meeting of his mortal rival? Breitbart explains “he stuck out his hand, smiled and said ‘Mr. Breitbart!’ I answered ‘this was inevitable’ and then we taped the piece.” Before a dropped call abruptly ended the cell phone interview, Breitbart did offer one bon mot, claiming “Eric Boehlert’s beard is just as dreamy in person as it is in his Twitter avatar!”

Eric Boehlert concurred that the meeting was completely congenial, telling Mediaite that he wasn’t really expecting any sort of showdown, but he did get a polite shot in against his online foe. “Just because I think he’s pathological and a cancer on our nation’s politics doesn’t mean that I can’t sit at the same table with him and be civil.”

The interview, led by George Stephanopoulos, superficially covered the nuts and bolts of the Shirley Sherrod controversy with predictable sorties, obfuscations and parries by both Boehlert and Breitbart. Both individuals are acutely skilled in media messaging, and neither strayed from their own talking points – which made for an exchange that was more minuet than mosh pit.

Of course there is also great irony that a segment so focused on race relations in America is being held by three white gentlemen.