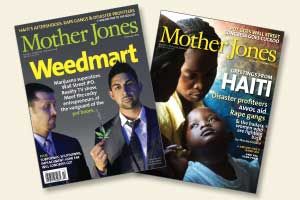 Over at Mother Jones they had a tough decision for their January/February issue. They had two big stories inside, one on the still slow-to-arrive relief in Haiti, the other on the marijuana business and the push for legalization. They liked both articles, but which one to put on the cover; the depression one or the fun one? In the end, they chose both (kind of) and have written an interesting article detailing why.

“With that in mind, we agonized more than usual about this issue’s cover options. Mac McClelland’s Haiti piece is an amazing story about what has been called America’s 51st state.
…
BBut as compelling as all that is in a story, it’s a tough sell on the newsstand. Even assuming that anyone tempted to buy this magazine probably isn’t expecting cheerful (our joke is that the MoJo tagline should be “It’s Worse Than You Think”), rape gangs are pretty heavy stuff to hit a new reader with on our first encounter.

Josh Harkinson’s story on the pot business poses, if anything, the opposite challenge. It’s a rip-roaring read, an in-depth look at the world of marijuana investors aiming to parlay the medical pot boom (and the growing momentum for legalization) into venture capital, IPOs, and Wall Street dividends. But on the cover, we wondered, would it be seen as a welcome relief from disaster and a Congress gone crazy—or reinforce musty cliches of MoJo as a counterculture relic?”

In the end, they came up with an interesting solution: Give the Haiti cover to the subscribers and the pot cover on the newsstand.

It’s a smart idea as, and it’s increasingly become clear, pot sells. And I’m saying “pot sells” in the same way that one says “sex sells” i.e. referring to the subject of pot and sex selling, not actual pot and sex being sold on the street corner. There’s a reason why CNBC advertised their recent documentary on the business, Marijuana USA, by touting the high ratings of its predecessor, Marijuana Inc. (now available on DVD!), let alone why they made a sequel in the first place. Americans are fascinated by marijuana. Of course, as we all know, they’re totally fascinated by it because they hate it, never touch it, and want it to remain illegal forever, right? Right?

Anyway, the Mother Jones piece is an interesting read and a fascinating look at the decisions and second guessing made inside every news room. Meanwhile, here at Mediaite, we just decide which unflattering screen grab to use of the anchors we don’t like.