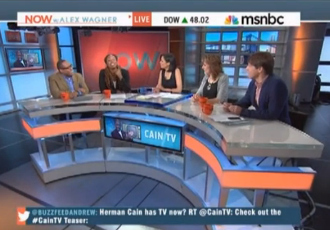 Mediaite readers might recall Monday’s release of the mind-blowing trailer for Herman Cain’s new online network CainTV, which featured all sorts of nonsensical ramblings from a homeless man, a tap-dancing “comedian,” and Cain himself. Tuesday’s panel on MSNBC’s Now With Alex Wagner relentlessly mocked the trailer, with the eponymous host suggesting that Cain is “a conceptual art project dreamed up by the far left.”

“It looks like [Cain] went into night court and just grabbed all the drunks and said ‘Any of you want a show because I got a network and I got to fill it full of people,'” comedienne Lizz Winstead

Much of the panel’s mockery focused on Cain’s “pearl of wisdom” from the trailer: “Liberty is a well-armed lamb contesting the vote. Let’s give a lamb a gun!”

Heather McGhee, from the progressive think-tank Demos, actually attempted to take this line literally, saying that “What he’s actually talking about is pretty scary, which is actually part of the big right-wing meme right now. It’s apparently to arm people or lambs going and trying to contest the vote and police, citizen police the polling station.”

“This has nothing to do with politics,” MSNBC contributor Robert Traynham shot back.

– RELATED: The Teaser For Herman Cain’s ‘Cain TV’ Will Blow Your Mind

“He does give voice to one splinter faction of the conservative base that believes that it’s about bearing arms and going to the ballot box and making quote, unquote, your voice heard,” Alex Wagner added.

“I’m not sure Herman Cain is not a conceptual art project dreamed up by the far left. It could be that this belongs in a gallery in Chelsea,” Wagner joked.

“He’s the new [Andy] Warhol. That’s what this is,” Winstead concluded.

And the original Cain TV ad below, via Cain’s Facebook page: