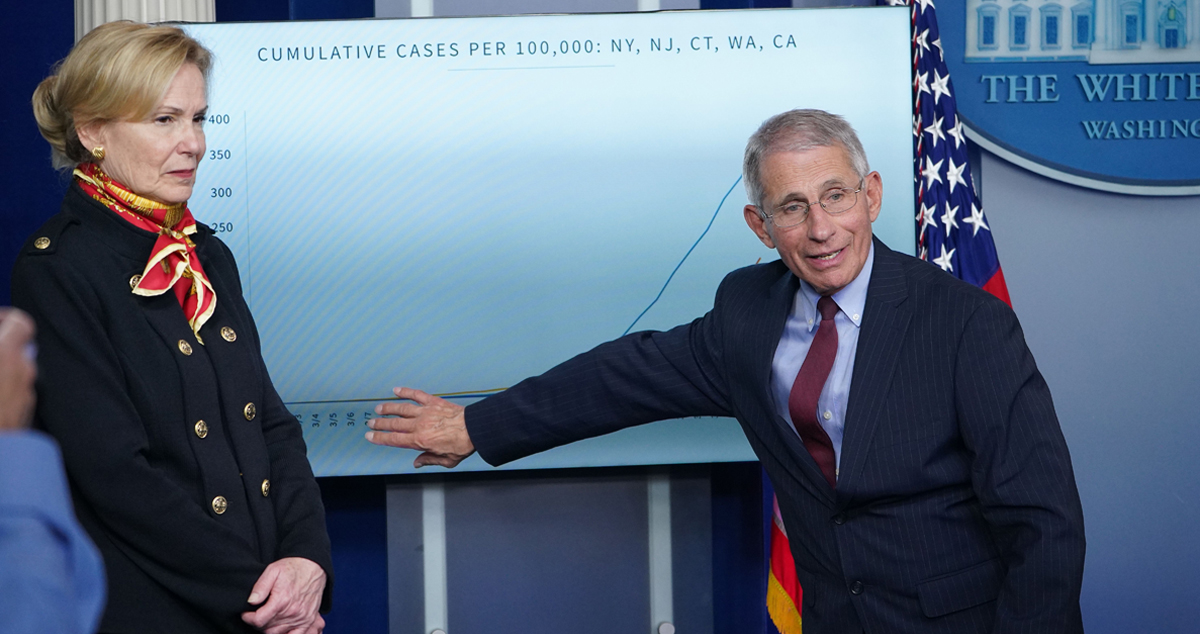 On Wednesday night, MSNBC’s Chris Hayes tweeted out a hot take about coronavirus, President Donald Trump, and the Covid-19 task force that made a pretty big splash, but not in a good way.

Hayes floated the conspiracy theory that the infamous “they” presented Americans with the bleak death toll projections during a coronavirus task force briefing in order to give Trump the opportunity for a “victory lap” later.

Hayes attempted to walk the line between just, like, you know, like, putting it out there, man, and donning the foil headgear himself. But it didn’t stop the dragging.

The “they” you are impugning in this quack tweet includes Birx and Fauci. https://t.co/3CdPpKzgbX

Only problem with this theory is Fauci would never go along with it. https://t.co/5Oh8sMf6ps

It makes me depressed that THESE are the people on TV delivering us “the news.” https://t.co/iGRV6qLjLj

This is an outrageous take. Every bit of reporting from the time suggested Dr. Birx and Dr. Fauci had to talk the President in to accepting that number.

Now you’re attacking their credibility to try and get Trump? https://t.co/cjOYyibSe4

Next time they say “he never listens to the experts,” remember this.

Now anti-Trump conspiracy theorists are attacking their credibility for it. https://t.co/k097bulTKv

So Fauci was in on it?

“Can’t quite bring to accept” but laying it out in detail nonetheless. ?

Yeah, that doesn’t quite hold up. Nobody knows (and nobody ever knew) exactly how many deaths there will be and the room for uncertainty remains wide, i.e. anywhere from mid-5-figures to low 7 figures. https://t.co/tehzHbl9P8

I hate Trump with a passion but this unhinged liberal media bashing of Trump will help him.

Trump has consistency underestimated the impact of Covid19 because of the impact to stock prices. Deliberately over estimating would tank the market further, and that’s all he cares for. https://t.co/5DvzqJMqs6

That Fauci is one devious dude! https://t.co/7HMUfgMcPq

“The most cynical take” that “I can’t quite bring myself to accept” is one he’ll share anyway because, hey, what harm is a conspiracy theory or do gonna cause on a website where he has a massive following? https://t.co/hgNXiGQKmj

Naturally, the defense will be “Hey, I didn’t say -I- believe it,” because technically he didn’t. But he knows good and damn well a handful of people out there will take it and run with it and the damage will be done. But, on this Holy Week, he can simply wash his hands of it.

Everyone has lost their fucking minds. Between the right wing and left wing conspiracy theories being peddled by pundits, I need a shower after being on Twitter for 10 minutes. You people have no shame. https://t.co/lplZvVzaJr

“They” is Dr. Fauci, Dr. Birx and the IHME model funded by the Gates Foundation. https://t.co/b48hsiCAmz

In order to make this allegation, you’d have to assume that career public health officials Dr. Birx and Dr. Fauci were in on it https://t.co/7bPs4UY4Bs

Narrator: that prediction came from multiple experts and projection models.

Which of them, exactly, are you accusing of emotional Munchausen’s? https://t.co/vy3CNTXdXT

Yeah, so you know this is a bullshit theory you “can’t quite accept” but you still put it out there anyway because you are FAKE NEWS. You are no different than Alex Jones right now.

I’m thankful ?the public in finally starting to see what a bunch of hacks you all are.

Annnnnnnd, here it is. They inflated the numbers to make Trump look good! Anybody believe Fauci and Birx are on Trump’s side politically and would knowingly cook numbers to help him? Hilarious. https://t.co/LGfhu0YCng

Can’t wait for your appearance on Tucker to discuss this conspiracy theory, Chris.

Of course, there’s no take that won’t find its supporters on Twitter.

If 5 people died as a result of his lies & incompetence it is an OUTRAGE!!

Not letting this clown move the goal posts. Sorry. https://t.co/79Ns8uDq1a

100 percent correct and, more cynically, not a bad political strategy. A terrible strategy for the human soul…..but that ship has sailed

There is no reason to be anything other than bleakly cynical when it comes to this man.

cynical maybe but it’s also the most and perhaps only logical explanation. We’ve been here for awhile

That was quite honestly what I assumed was happening from the start. He’s a used car salesman at heart, and he’s negotiating to a number he can live with.

Exactly where my head went and honestly not cynical at this point, just realistic about who they are.

Accept it, because that’s exactly why they did it. https://t.co/gL1NhtU6PU

And the unspoken but theory-adjacent tweet from The Intercept’s Mehdi Hasan, which shows what Hayes had to gain from floating a theory he doesn’t “accept”: Spin-offs.

Trump will continue, as @chrislhayes says, to try & “anchor” everyone to 100k deaths, which then he’ll say ‘Hey, there were only 50k or whatever, VICTORY!’

His opponents need to anchor everyone to Trump’s claim that, forget deaths, the number of *cases* would be “close to zero”. https://t.co/aGQCh5N1Qz

Hayes spent more time defending his tweet than getting praise for it. But the massive number of retweets and likes makes most of that moot. It’s out there. And so are the offshoot theories. Mission accomplished.