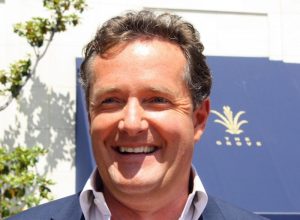 The Women’s March on Washington is huge. For real, it is huge. Women are marching in Washington and cities around the world to make it clear that, among other things, they are actively watching Donald Trump and his administration and are ready to fight back against legislation that limits human rights, reproductive rights, immigrants’ rights, and more.

Trump himself has made numerous disparaging remarks about women, suggesting that they shouldn’t work and encouraging younger men to grab women “by the pussy,” for instance. The women attending the marches are fighting against that type of rhetoric and behavior, but Piers Morgan is still confused about what they’re doing out there. He tweeted this:

I’m planning a ‘Men’s March’ to protest at the creeping global emasculation of my gender by rabid feminists. Who’s with me?

The tweet is hours hold but he is still trending on Twitter, which is an accomplishment for a man who regularly says controversial things on the platform.

He has been arguing with people upset by his tweet, insisting that he likes women in general, just not “rabid feminists.”

The responses are something else, though:

You know you sit next to a feminist every morning, right? @piersmorgan https://t.co/IAIq4kuCqE

@piersmorgan oh, possum. Sorry your masculinity is so fragile. Are you ok? Do your balls jus fall off when a woman doesn’t smile at you?

The Park City #MensMarch is underway! There’s only 8 of us but we’re yelling Warrant lyrics outside of a Sephora. Thanks @piersmorgan!

Piers Morgan is like Benjamin Button, but for the capacity for critical thinking.

I’m planning a march with the singular goal of trying to emasculate Piers Morgan https://t.co/jhZsKmmlBM

Just made another sign for today. Too soon? @piersmorgan pic.twitter.com/3xzlh4qop9

@jonfavs @piersmorgan that response was everything!

@piersmorgan piers, strong men stand up for women, and the more women have a seat at the table, the more power/success we all have.

@say_shannon @piersmorgan I have to say he lost me too entirely when he said that.

@matt_higginson I really can’t imagine being so insecure as to think women’s rights threaten your manhood. Oh, Piers

@piersmorgan Just for once, be a gentleman and not a dick head.

I’m headed to the Sundance #WomensMarch – ur welcome 2 come feel the weight of my feminist balls in your tiny hand if it’ll help https://t.co/au25gt2DtZ

@RebeccaFront @piersmorgan Is he though? Maybe his brain was in the parts that were emasculated?

You know you sit next to a feminist every morning, right? @piersmorgan https://t.co/IAIq4kuCqE

Bro that was yesterday, hardly anybody turned out https://t.co/fXtWNZV0ks

Marching for women’s rights doesn’t make me feel like less of a man. Sounds like a personal problem, fam. https://t.co/KnivCj0di3

For those accustomed to privilege, equality feels like oppression. #WomensMarch https://t.co/DIbzb6Sa6o

one of the many reasons women are marching is because there’s a man in office who belittles them @piersmorgan pic.twitter.com/COknJ3AALT

if women marching for their rights & against misogyny threatens your identity, your concept of your own gender is shaky & rooted in misogyny https://t.co/PhC09LMXdd

.@piersmorgan Wow, you scare easily. I went to #WomensMarch last night in Brussels, and I felt empowered, not emasculated. Don’t be afraid.

I’m neither joking or exaggerating when I say no one likes you https://t.co/xROoutRDeg

Reposting this one for @piersmorgan pic.twitter.com/i5GFEPtYvL

.@piersmorgan Why do you have to hang off the coattails of every controversy? It’s so needy.

Piers was going to be a tough, silent longshoreman, but feminism made him a prancing twitter donkey https://t.co/Nypw6g5lXM

@LeslieMarshall @piersmorgan keep him away from The Queen please

at this point Piers Morgan seems to be solely famous in America for getting owned online.