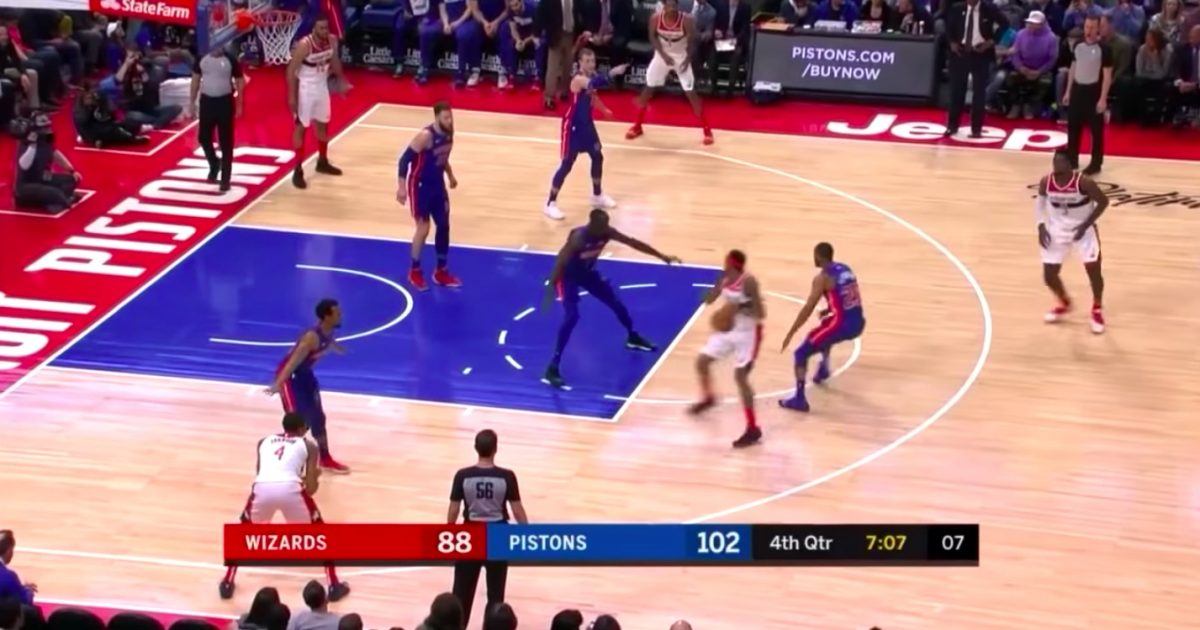 NBA star Bradley Beal committed such an egregious traveling violation last night that even he joked about it on Twitter, but that didn’t stop the league’s referee association from defending the five-step no-call.

The official Twitter account for the NBA’s referees responded to the incident, which occurred during the Washington Wizards’ 121-112 loss in Detroit last night, by stating that it “legal.”

Bradley Beal decides the game is over and travels to DC by foot #dcfamily pic.twitter.com/L3wh1iuu1F

“The offensive player gathers with his right foot on the ground. He then takes two legal steps, before losing control of the ball,” the NBA Referees Association wrote on Twitter in response to the website Complex calling to “cancel” the league’s officials. “After regaining possession, a player is allowed to regain his pivot foot and pass or shoot prior to that foot returning to the ground. This is legal.”

The offensive player gathers with his right foot on the ground. He then takes two legal steps, before losing control of the ball. After regaining possession, a player is allowed to regain his pivot foot and pass or shoot prior to that foot returning to the ground. This is legal. https://t.co/0hVqgHw3w7

At the end of the contest last night, Beal laughed at the call on Twitter, writing that it “look clean to me ????‍♂️.”

Traveling has increasingly become a point of contention between the NBA and fans, as critics believe stars, like James Harden and LeBron James, get away with committing outrageous walking violations due to the legal ambiguity around certain step-back and hop-step moves.

Some of these angry NBA fans took to Twitter to lash out at the league for defending the call, with some joking that the call creates a new rule that allows players to take extra steps if they simply “bobble” the ball around. Read a few of the best posts from outraged NBA fans below:

Even if he “lost control”, it’s still a travel to pass or shoot it to yourself. Y’all got this one wrong, it’s okay to be wrong haha even brad knows it was a walk… and a ref told me to “learn the rules” the other day…

So are you saying that I can take 2 steps and then fumble the ball to give myself an extra step or two?

You were better off not even addressing this one. This is just sad now.

Instead of dribbling, simply juggle the ball while running, but remember to shout “WHOOPS I’VE LOST CONTROL” periodically https://t.co/w5pvSIcR4A

So he takes “two steps” and loses the ball… on his own.

Then gets the ball back, without it being touched, and takes two more steps?

So all a player has to do is drop the ball, and then pick it up again, and he can take two more steps.

He also didn’t lose control of the ball. So, basically just bobble the ball and you can take as many steps as you need to?

gotta find someone who will defend you like the nba referees defend this travel https://t.co/pHsKRlHX9Y