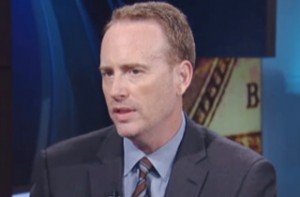 If the comments about Donald Trump from NBC Entertainment Chairman Bob Greenblatt are any indication, the Apprentice star-turned-Republican presidential nominee might soon be feuding with his old TV network again.

The Peacock Network executive took aim at Trump using his personal Facebook over the weekend, where Greenblatt expressed some choice thoughts about the Republican 2016 nominee. 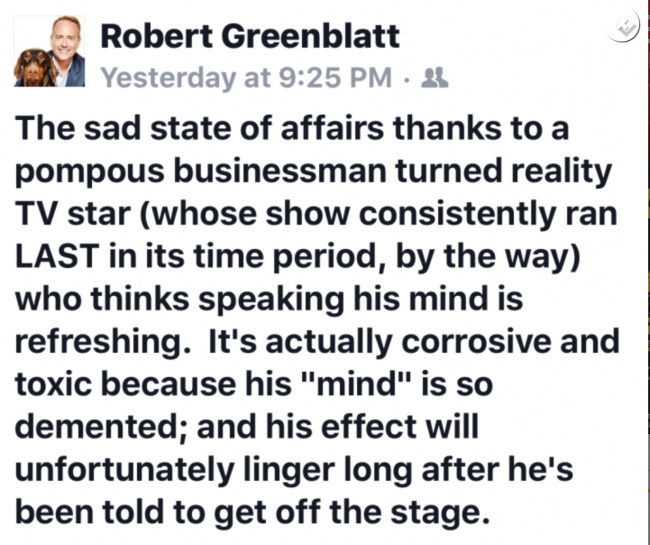 The sad state of affairs thanks to a pompous businessman turned reality TV star (whose show consistently ran LAST in its time period, by the way) who thinks speaking his mind is refreshing. It’s actually corrosive and toxic because his ‘mind’ is so demented; and his effect will unfortunately linger long after he’s been told to get off the stage.

Ever since his campaign began, Trump has frequently bragged about his campaign’s positive effect on viewership and TV ratings. Beyond the name-calling in his post, Greenblatt’s attack seems focused on hitting Trump’s viewership for the show that launched him into the public eye, The Celebrity Apprentice.

NBC produced the Apprentice series before Trump began his campaign, but the network’s relationship with its star collapsed after they condemned Trump’s incendiary rhetoric about immigrants. The feud came to a head when NBC refused to air the Miss Universe beauty pageant, but Trump has since settled his lawsuit with the network and appeared on Saturday Night Live.

Greenblatt’s Facebook account is private and his post has since been deleted, but a screenshot was picked up by Page Six. Indications are that Greenblatt was responding to a New York Times op-ed called, “Donald Trump Is Making America Meaner,” which examines how Trump’s bombast encourages aggression and racial tension.

A TV insider found Greenblatt’s slams intriguing, given that he joined the network in 2011, and Celebrity Apprentice kept going for several seasons after that. “Greenblatt can be credited as the man who helped make Trump more famous, and appeared at the time to be delighted by the ratings,” the source said to Page Six.