Nell Scovell Is My New Hero 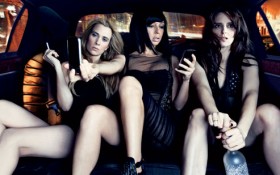 I remember when Christopher Hitchens wrote that ridiculous Vanity Fair piece about how women aren’t funny. I wrote a screed about it and got in a public scrap with Graydon Carter after at a very awkward luncheon. What can I say, this line of reasoning has always irritated me. Women aren’t funny? Really?

So let’s just get that straight.

Nell Scovell has that straight. She created the TV series Sabrina, the Teenage Witch and has written for Coach, Murphy Brown, Monk, N.C.I.S., Charmed, The Critic, The Simpsons and Newhart.

And Late Night with David Letterman.

That’s the jumping-off point for Scovell’s essay today on VanityFair.com, “Letterman and Me,” where Scovell recounts her experience in the writers room at Letterman’s old show. Did she have sex with him? (I know that’s your first question – it was mine – so let’s get it out of the way: No.) Actually, the essay isn’t really about that. Here’s how it starts:

At this moment, there are more females serving on the United States Supreme Court than there are writing for Late Show with David Letterman, The Jay Leno Show, and The Tonight Show with Conan O’Brien combined. Out of the 50 or so comedy writers working on these programs, exactly zero are women. It would be funny if it weren’t true.

The thesis of her piece comes next: “Late-night talk shows have long snubbed female writers.” And then she examines why that is, through the lens of her personal experience, without complaining or accusing. It’s the sort of thing where if you switched up a few words, it might be the account of a female reporter describing her experience in an early-80s newsroom, or maybe an early-80s boardroom, or on an early-80s campaign trail.

Which must mean that women just aren’t as good at comedy, journalism, business or politics, right? Ha, ha.

Back to Scovell: She was one of only seven female writers hired for a Letterman writing staff in 27 years. Seven. Here’s her account of how it felt to work there:

Scovell left and went back to LA to the career referenced above, and that was that — until the Letterman story broke. That’s why, she says, she is speaking up now: “I’d like to pivot the discussion away from the bedroom and toward the writers’ room, because it pains me that almost 20 years later, the situation for female writers in late-night-TV hasn’t improved.”

Scovell notes — correctly, according to my own anecdotal experience chatting with comedy writers — that “women just don’t apply for these jobs.” She suggests it’s because so much of it is done through connections (“the shows often rely on current (white male) writers to recommend their funny (white male) friends to be future (white male) writers”). I think there might be a confidence gap there, too — that’s a tough limb to go out on (my own experience doing sketch prior to this whole blogging thing was marked by some awkward bumping up against this stuff). But here’s a more authoritative take — SNL alum Michaela Watkins in Black Book last month:

“[C]omedy itself is not as forgiving to women as it is to men… men can get away with certain things and so can women, but it seems like women really have to blow doors in order to do things. I sometimes wonder. This is so personal, and I don’t think I am speaking on behalf of comedy. I am just speaking on behalf of me when I say—having been at the Groundlings and places like that, it’s moving swiftly, but there are times where men have a little more leeway with the audience. Then I think it is an even playing field, and then I think it’s play ball. I am just saying that first pitch; I think women have to hit the ball extra hard.”

(By the way, after Watkins was inexplicably let go from SNL this fall, Washington Post TV critic Tom Shales suggested that she “may have been just too classically pretty to be hilarious.” Because Angie Tempura was such a knockout. Sheesh. The too-pretty comment reminded me of another head-bonk quote I remember reading 3 years ago, by Bob Odenkirk about Jenna Fischer in Entertainment Weekly: ”She reminds me of Diane Keaton with that ability to be smart, have dignity, and be as funny as any guy.” As funny as any guy.)

Is Scovell as funny as any guy? Presumably, given her record. So this isn’t some screed borne of years of pent-up frustration — it’s measured and thoughtful and matter-of-factly assesses the situation. However many protestations are made about how it’s getting better and not systemic and women need to apply more and etc. etc. etc., the numbers speak volumes: No female writers on staff at Letterman, Leno or Conan. Seven women on Letterman’s writing staff in 27 years on the air. In this age of Tina Fey-Kristen Wiig-Amy Poehler dominance, that just seems so outdated. Funny is funny. Thanks to Nell Scovell for reminding us of that.

…this is a long list. I have a life. Finish it yourself in comments!