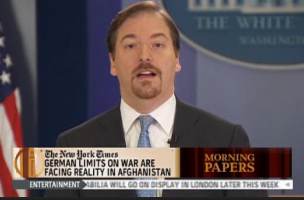 There’s a Youtube clip going around that has alarm bells going off about the White House’s support of Harry Reid‘s opt-out public option bill, versus a public option trigger that had the support of GOP Senator Olympia Snowe (R-Maine). In the clip, NBC News’ Chuck Todd tells Joe Scarborough that White House sources are telling Reid, “Don’t come crying to us for that last vote.”

This triggered TPM to opt out of trusting what the White House says, and prompted Todd to do some quick explaining. Todd’s quote does, for the life of me, sound like the White House will hang Harry Reid out to dry if his bill fails to get to 60 votes. Chuck says that’s not what he meant.

Todd responded to critics via his Twitter feed, insisting several times that they were ignoring context. He explained to Greg Sargent via email:

But Todd emails that he didn’t mean this is the actual message the White House is sending, and said it was his own characterization. “It was `as if’ they were sending that message,” Todd said. “I feel like my quote is being a tad twisted. Everything gets too literal.”

I took a look at the full Morning Joe segment below, and earlier in the clip, Todd does explain that once Reid decided to go with the opt out, the White House pledged its support.

Still, Todd’s later quote doesn’t so much suffer from a lack of context as from the fact that it’s the exact opposite of what he said elsewhere in the segment. When someone tells you not to come crying to them, it’s because they won’t give you what you want.

He also posits the idea that the “trigger” public option is something that “sets off” those wackaloons in the “progressive blogosphere.” You know, like that pajama-clad freak Rachel Maddow. This isn’t the first time Todd has positioned the overwhelmingly supported public option as a fringe lefty issue.

As a side note, who would have ever thought that Harry Reid would show more stones on the public option than the White House?

Here’s the video of the full “Morning Joe” segment: