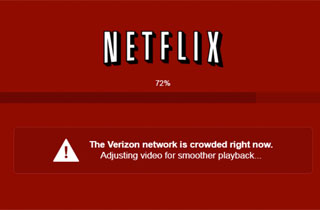 OMG, there’s some uber dramatic drama going on between Netflix and Verizon over slowed streaming times due to congested cable networks, the type of issues that form the crux of the net neutrality debate. Hashtag DRAMABOMB.

Specifically, Netflix users have noticed that whenever their episodes of Breaking Bad or My Little Pony are streaming slowly, Netflix tells them exactly who’s responsible for the poor service. The one that got the most attention came from Yuri Victor:

Gizmodo reports that soon afterwards, a Netflix spokesman confirmed that not only was the screengrab real, it was a Netflix policy to let users know exactly who was at fault for their service:

They soon noted that Netflix’s policy extended to AT&T as well, and, likely, all other ISPs (though we haven’t confirmed it yet), while another spokesperson revealed that the notices were part of a nationwide test to “let consumers know how their Netflix experience is being affected by congestion on their broadband provider’s network.”

The bitchslap fight comes in the form of Verizon sending Netflix a cease and desist letter, asking not-so-nicely for Netflix to apologize for saying that their slow service was Verizon’s fault. In a statement, Verizon said that Netflix’s notifications were not only “inaccurate,” they were also “deliberately misleading.” Also, they would like Netflix to tell them which people they lied to, and that they’d better do it soon, because otherwise Verizon is gonna sue their little nerd butts off.

(A little self-indulgence: I used to report on FCC issues for a trade publication, and I’ve always wanted to say this, because I never got to there: Broadband service throttling drama drama drama drama DRAMMAAAAAAAA.)