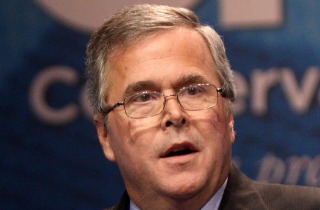 According to Bush’s former classmates, he smoked a “notable” amount of marijuana and sometimes bullied other students — an accusation about which he had no recollection — at Phillips Academy in Andover. A former roommate said Bush was even “apolitical,” refusing to engage in debates and conversations about important political topics like the Vietnam War.

“I drank alcohol and I smoked marijuana when I was at Andover,” Bush told the Globe. “It was pretty common.”

His grades were “so poor,” according to the Globe profile, that could have been expelled. If kicked out, it would have been a high-profile embarrassment for his family — his father, in particular, who was a congressman at the time and a member of the school’s board of trustees.

“The first time I really got stoned was in Jeb’s room,” said Peter Tibbetts, another former classmate. “He had a portable stereo with removable speakers. He put on Steppenwolf for me.” At one point, Tibbetts bought hashish (a stronger form of marijuana) from Bush, but stressed that Bush was by no means a dealer — “though he did suggest I take up cigarettes so that I could hold my hits better, after that 1st joint.”

Bush, who opposes the legalization of marijuana for medicinal and recreational use, has said it was “stupid” and “wrong” of him to smoke marijuana.

One regret Tibbett has about his relationship with Bush was when the pair bullied a “short classmate” by sewing the bottom of his pajama pants. Bush said he does not think that ever happened, adding it was “44 years ago and it is not possible for me to remember.”

Another former classmate painted an elitist picture of Bush:

“The thing that really struck me about Jeb more than anyone I ever met, is he understood that he was from the world that really counted and the rest of us weren’t. It really was quite a waste of his time to engage us. This was kind of his family high school. There wasn’t anything he could do to be kicked out so he was relaxed about rules, doing the work. This was just his family’s place.”

You can read the full Boston Globe profile here.