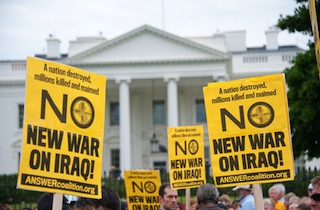 A new Quinnipiac poll shows the American populace is a bit conflicted about the deteriorating situation in Iraq.

By substantial margins, voters feel that the Bush administration’s invasion of Iraq in 2003 was wrong and that the Obama administration’s removal of U.S. troops from the country in 2011 was correct*. Voters also squarely place the blame for the Iraq mess on Bush by a two-to-one margin.

Meanwhile, it would be mistake to re-involve the United States in the Iraq conflict, a substantial number of respondents said, and a majority believes the U.S. should not even work with the Iraqi government to defeat the Sunni insurgents. However, 72% believe ISIS would initiate terrorist attacks against the United States very shortly if they gained a foothold in Iraq. But, a plurality of voters does not think the U.S. should launch airstrikes against them.

Oh, and voters also said 2-1 that the U.S. was too involved in the world and needed to focus more on domestic issues.

So, the U.S. should never have invaded Iraq, absolutely should have gotten out, should not reengage itself, and in fact should withdraw generally from geopolitical conflict, all opinions roughly coincident with Obama’s policies; but they also think Obama’s dropped the ball on Iraq and that Bush did a better job of it.

*This decision has gotten less popular in the past three years, though still polls twenty percentage points above the alternative.