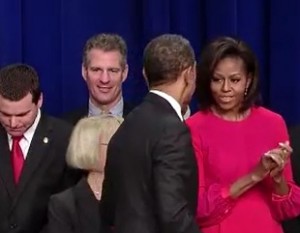 Republican Senator Scott Brown (R-MA) has apparently joined his opponent Elizabeth Warren by featuring President Obama in a campaign ad, albeit not quite as prominently. NBC’s Kelly O’Donnell noticed this new Scott Brown radio ad in which he burnishes his bipartisan credentials, and calls “Standing with President Obama on the day he signed (Brown’s Veterans Jobs Bill) into law” as one of many “great experiences” he’s had as a freshman Senator.

While the mention is small, it is noteworthy, as there is another national politician from Massachusetts who studiously avoids using President Obama’s name when he agrees with him. Brown’s relative cozying up to President Obama demonstrates that, at least in Massachusetts, where the President has consistent double-digit leads against presumptive Republican nominee Mitt Romney, the POTUS with the mostest is a good guy to stand next to. The fact that Brown apparently sees the President as an asset in his neck-and-neck battle with Elizabeth Warren is yet another sign of strengthening presidential coattails.

Brown’s habit of voting with President Obama (70% of the time in 2011, according to one estimate) and against his own party (54%) does have a dangerous sort of appeal to the low-information “independents” who decide every election (even as it rankles conservatives), but as WBUR’s Fred Thys notes, the devil is in the details:

…we pointed out that in 2011, Brown voted against his own party 54 percent of the time, and with President Obama 70 percent of the time. We based the story on a CQ ranking of Senators by how partisan (or not) they are. The rankings are based on every roll call vote a Senator makes, in which the majority of Democrats votes against the majority of Republicans. So these are, arguably, not easy votes, but controversial and contested ones.

Still, several of you commented that we should look at how Brown voted when his vote made the difference.

We did, and here’s what we found.

In 2011, Brown cast only two votes where the outcome would have been different had he voted the other way.

Thys goes on to explain that Brown “voted against his party” in “100 percent” of those occasions, but in reality, one of those votes preserved a compromise with the GOP House, so while it went against his Senate colleagues, it was arguably not against his party. The other was a vote to extend the amounts for VA loans, not exactly a flamingly liberal act.

The rest of the time, Brown’s “bipartisanship” amounted to symbolic nods to the liberalism of his home state. As we recently noted, Brown has promised to repeal the President’s Affordable Care Act (“Obamacare”), even as he takes personal advantage of it. How that will play in Massachusetts is an open question, since the law that it was modeled on, Romneycare, enjoys overwhelming support in the state.