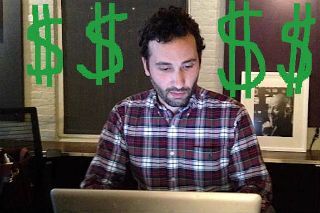 In today’s edition of News We All Predicted: Joe Muto, aka Gawker’s “Fox News Mole,” is shopping his memoir to book publishers.

In what plays like an attempt to extend his 15-minutes-of-fame, the New York Observer reveals that his memoir is tentatively titled An Atheist in the Foxhole (credit due…that is clever) and will take a humorous Sedaris-like tone:

(UPDATE: A former Fox colleague writes in to tell me that during the fallout, he met with Muto over coffee and said “If I were to ever do a memoir about Fox, my book would be called ‘An Atheist in the Foxhole.'” Perhaps Muto can’t come up with his own book title?)

The proposal outlines chapters devoted to the “cheapness and stinginess” of Fox News (‘cannot be overstated’), Mr. O’Reilly’s morning ritual (‘lots of yelling’) and— ‘in what’s certain to be the most talked about chapter of the book’ —the 2004 sexual harassment suit filed against Mr. O’Reilly… ‘I’ll go through the lawsuit line by line, offering my own interpretation and commentary, and will definitively answer the question Did He Do It?,’ Mr. Muto wrote.

Man, I wish someone would pay me big bucks to write about my experience with the cruddy bathrooms at Fox (which, FYI, aren’t even owned by the network) and Bill O’Reilly‘s yelling. I could tell you I’ve heard O’Reilly yell a few times as I passed in the hallway. Oooo! Gossip!

But, really, I have to admit that even though I’ve been hard on Muto’s un-newsworthy “leaks” since my first Mediaite column, I think this is a somewhat smart move.

Why? Because it will surely bring in more than the measly $5,000 Gawker paid him for his faux-gossip. And heck, if Nicole “Snooki” Polizzi can get a book deal, then why not Muto? Anything he writes would be less sleazy (maybe?), definitely more well-written, and probably more entertaining.

Even Muto seems to recognize that his entire “mole” career is based on slinging cheap gossip-porn for the anti-Fox crowd (O’Reilly poops! Sean Hannity is a Republican! Mitt Romney likes horses!): he says the book will appeal to the “thriving cottage industry of people who love to hate Fox News.”

Can’t fault the guy for smelling a cash-in and taking it.