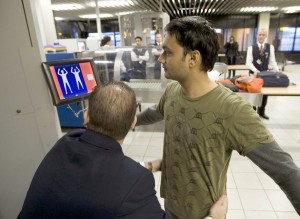 There’s been much written about the obtrusiveness of the new full body scanners (or body-scatters) being unrolled at airports. However, The Atlantic’s Jeffry Goldberg has found some additional disturbing facts both about the scanners (for one, he got an employee to admit he called the machines “The Dick-Measuring Device”) and, even worse, about what happens when you opt out.

“At BWI, I told the officer who directed me to the back-scatter that I preferred a pat-down. I did this in order to see how effective the manual search would be. When I made this request, a number of TSA officers, to my surprise, began laughing. I asked why. One of them — the one who would eventually conduct my pat-down — said that the rules were changing shortly, and that I would soon understand why the back-scatter was preferable to the manual search. I asked him if the new guidelines included a cavity search. ‘No way. You think Congress would allow that?’

I answered, ‘If you’re a terrorist, you’re going to hide your weapons in your anus or your vagina.’ He blushed when I said ‘vagina.’

‘Yes, but starting tomorrow, we’re going to start searching your crotchal area’ — this is the word he used, “crotchal” — and you’re not going to like it.’

‘We have to search up your thighs and between your legs until we meet resistance,’ he explained.

‘Your testicles,’ he explained.”

The most discomfiting thing about Goldberg’s findings aren’t the gropings but the fact that they seem as if the security team isn’t even looking for anything. The new guidelines have just been put in place to scare people into going through the machine. This means that, if a terrorist is willing to go through with some slight molestation (and, if they’re already willing to insert a weapon or bomb or what have you…into themselves, what’s one last discomfort?) they may be able to get through pretty easily.

The second most discomfiting thing is that the airport is going to find out what you’re packing in your trousers one way or another.

Check out Goldberg’s two posts on the pat-downs here and here.