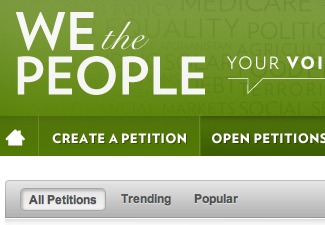 Other petitions that have reached the 100,000 threshold and have received no answer to speak of include petitions to pardon Edward Snowden, let Tesla sell directly to consumers in every state, officially deem the Muslim Brotherhood a terrorist organization, and allow Ukrainians 90-day visits in the United States without a visa. That last one was posted in February, the other three were posted last summer. And no response on any of them yet.

Cue, then, this new petition telling the White House that transparency isn’t an indefinite proposition.

Whitehouse.gov petitions were intended to give the public a voice. The idea is that if more than 100,000 people all feel strongly enough about something to hand over their home address and personal email to the government and complete a nearly impossible CAPTCHA, then the President of the United States should have to respond to them. Because… democracy.

Here’s the problem: there are dozens of Whitehouse.gov petitions that have received more than 100k signatures, but have gone months and even years without a response (1). That’s not improving transparency, it’s the same gov’t spin we’ve always had. So what will it, Obama, hypocrisy or democracy? Sign!

And in case you’re wondering, yes, this very question is addressed in the White House’s official Q&A for the We the People petitions.

We will do our best to respond to petitions that cross the signature threshold in a timely fashion, however, depending on the topic and the overall volume of petitions from We the People, responses may be delayed.

(Insert your own joke about Obamacare delays here.)

I’d also like to take this opportunity to point out that when White House staffers were asked about the site last year, the overwhelming answer was, “My God, what have we done?”

There is only one word to describe this: LOL.