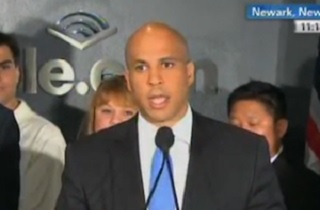 The National Review has been working at picking apart some of Newark Mayor Cory Booker‘s (D-NJ) campaign anecdotes, including the story of shooting victim Wazn Miller, whom Booker has said lay dying in his arms shortly after being gunned down on a Newark street in 2004.  To that end, The National Review sued the City of Newark for records they say were being “stonewalled” for “weeks,” but ThinkProgress obtained documents that largely confirm Mayor Booker’s account, and show NRO‘s claim of stonewalling to be demonstrably false.

Slate‘s Dave Weigel defended NRO‘s pursuit of Booker’s records on the basis of questions that have already been raised about Mayor Booker’s possible past use of a “composite” drug-dealer character named “T-Bone.” Booker has maintained the character is real, but Rutgers University Professor Clement Price says Booker admitted to him that T-Bone “was a ‘composite’ of several people he’d met while living in Newark.”

Weigel disagrees, then, with the way ThinkProgress characterized NRO reporter Eliana Johnson‘s pursuit of Booker’s anecdotes as comparable to the Birthers. In the process, though, he abets NRO’s fantasy that they’ve been victims of a “stonewalling” effort, noting that “This week NR sued the Newark Police Department, the city of Newark, and Booker to pry loose documents about the death of Miller.”

As he notes, ThinkProgress obtained the records pertaining to Wazn Miller’s death, which include the following:

It was learned that former Newark City Councilman Cory Booker had been in the area when the incident occurred and had rendered aid to the victim. The undersigned contacted Mr. Booker and conducted an interview with him. He advised me that he had been in the area when he heard the gunshots. He stated that he did not witness the shooting nor did he observe the suspect. After hearing the gunshots, he responded to the victim and rendered aid and assisted in securing the scene until the arrival of officers.

Weigel notes that the report “confirms the gist” of Booker’s version of the story, but also points out that the police report indicates another witness said she held Miller in her arms until he died. Dave characterizes it as “”Booker merely helped at the scene after a boy was shot to death,” but the report clearly says he “rendered aid to the victim.”

Is it possible for more than one person to hold a dying teenager? Is it possible to render aid to a shooting victim without doing something that can be defined as “holding?” Is it possible that the trauma of the moment clouded Booker’s perceptions, as he himself says it did? By any reasonable standard, Booker’s version if events is substantially consistent with the police report, and well within the margin of error you’d afford someone in such a situation, but if you want to continue pulling at this particular thread, be my guest.

But ThinkProgress also obtained documents that reveal The National Review‘s claim of “stonewalling” to be an outright lie, one which casts doubt on the “solid, dogged, unpopular journalism” that Weigel admires so much. In a lengthy bit of self-martyrdom, National Review editor Rich Lowry explained Wednesday that in their noble pursuit of the truth about Wazn Miller, “for weeks now, we have been stonewalled and given the run-around by everyone we’ve asked for help in obtaining the relevant police records. We’ve asked nicely, we’ve asked firmly, we’ve asked in every way imaginable, but gotten nowhere.”

According to documents released to ThinkProgress, however, the City of Newark requested an extension of four days beyond the time frame required by law, a request it made two weeks ago. On August 30, eight days after NRO submitted its records request, Deputy City Clerk Kenneth Lewis told them they would have their on or before September 13, instead of the original date of September 9. For some reason, Lowry waited until September 11 to file his lawsuit, but couldn’t wait until September 13.

The term “stonewalled” is somewhat subjective, I suppose, but there’s really no way to make four days equal “weeks,” or several timely, informative responses into “getting nowhere.” The National Review is after something, but it appears to be something other than the truth.